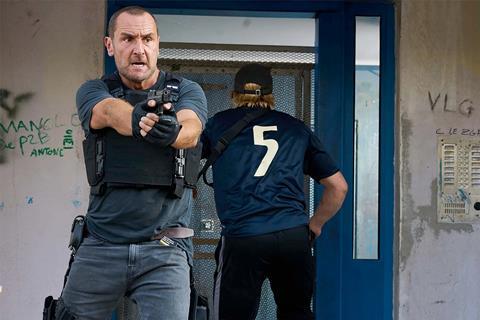 Based on actual events, The Stronghold is a stylish but familiar cop drama that examines the tightrope police officers sometimes have to walk to avoid becoming as corrupt as the criminals they are tracking. Gilles Lellouche is a commanding presence as a veteran lawman who is losing faith in the value of the job he does, and director Cedric Jimenez puts together some compelling action sequences. And yet, the film’s sombre thoughts about the moral grey areas in policing aren’t particularly new, especially when yoked to a fairly standard crime procedural.

This is a crime film without a traditional villain

The Stronghold debuted in an Out Of Competition slot at Cannes and opens in France on August 18 under the title BAC Nord. Across the rest of the globe, Netflix will handle distribution, and the film’s recognisable cops-versus-crooks narrative should perform well on the streaming platform’s genre-heavy algorithm. Set in Marseille, Jimenez’s fourth feature focuses on a squad of three cops — leader Greg (Lellouche), father-to-be Yass (Karim Leklou) and laidback Antoine (Francois Civil) — who have watched their city’s crime rate increase. Frustrated at their inability to stem the flow of drugs, no matter how many busts they make, Greg gets the go-ahead from his commanding officer to be more aggressive in their efforts to stop dealers — even if it means bending the rules.

The story is based on a 2012 incident in which several arrests were made within Marseille’s BAC crime unit amid accusations of drug theft and extortion. The Stronghold’s first half illustrates how good cops could find themselves in such a situation, delivering muscular chase scenes and spirited male bonding as we witness the close bond Greg, Yass and Antoine share both on and off the job. Jimenez encourages the testosterone-rich atmosphere, with the characters affectionally calling each other ’bro’ as they exchange playful digs. Indeed, the rapport between the three actors is The Stronghold’s strongest suit: Leklou is endearingly soft-spoken, while Civil projects a little edge as a pot-loving cop who develops a connection with wary young informant Amel (Kenza Fortas).

This affection between the men is crucial because it adds an emotional undercurrent to a thriller plot which is not especially original. Whether it’s investigating the toll that police work takes on cops or illustrating the tension between law enforcement and the low-income communities that often feel targeted, The Stronghold has thoughtful ideas, but theyhave been addressed in dozens of other cop dramas. Still, Greg, Yass and Antoine’s friendship gives the proceedings a rooting interest.

After a gripping extended showdown in which our heroes are outnumbered by criminals in a housing complex, the film might seem to have reached its natural happy ending, but then Jimenez (who wrote the screenplay with frequent collaborator Audrey Diwan) switches gears, quickly sending the three officers to prison once they’re arrested on trafficking charges. From there, The Stronghold transforms from an action-thriller into a character drama as Greg, Yass and Antoine separately cope with the shock of their new circumstance. Lellouche is especially good here, illustrating Greg’s anguish at feeling betrayed by his superiors, erupting in righteous fury that suggests a man confronting the possibility that all the good he thought he did as a cop was for naught.

The lead actors are all charismatic, while the supporting cast is a little less vibrant, including Adele Exarchopoulos in the thankless role of Yass’s supportive wife Nora. Interestingly, this is a crime film without a traditional villain — no evil gangster, no maniacal drug lord — although Greg will learn that his real enemies may actually be within the police force. The 2012 arrests of Marseille’s anti-crime unit members sparked debate about just how much leeway law enforcement should have in the name of protecting citizens. But as entertaining as The Stronghold can be, it ends up reducing this debate to grist for one more cop film.