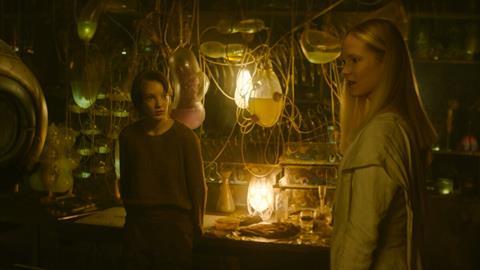 A markedly imaginative dystopian fairytale – an eco-futurist film, if you will – Vesper is one of those few science-fiction fantasies that comes with an entire world built in believably. While its story is related in a low-key register, and can seem more like part of a ripening high-end limited-series than a film – a Handmaid’s Tale, His Dark Materials, or Noughts + Crosses – the visualisation of this high-concept story about a young girl in an enchanted forest is arresting and punches far above its budget level.

Matters ecological are at the heart of this complex world-build: the instability of natural energy supplies drives the drama

At 116 minutes, Vesper is a difficult commercial proposition. After its world premiere in Competition at Karlovy Vary (followed by a Fantasia screening), it will go out through IFC in the US at the end of September, and other key territory deals have been signed (Signature in the UK, for example). Vesper will certainly draw interest, but how this property can be built out is the main underlying question for France’s Bruno Samper and Lithuania’s Krstina Buozyte (Vanishing Waves)

There are no names in this Lithuania-shot, English-language feature from writer-directors Buozyte and Samper. Its British cast is led by Eddie Marsan and newcomers Raffiella Chapman and Rosy McEwen: all are solid and work sympathetically with the environment into which they are thrown, a post-War world, but rural, not industrial. Thirteen year-old Vesper (Chapman) lives in a Brothers Grimm cottage in the woods in a lushly ripe vegetation where everything is alive and possibly sentient – or close enough to it. Seeds are the key to her future, but peril surrounds them.

The boxy hovering robot who follows Vesper through the woods, issuing instructions and cautions, is actually her father (Richard Brake), a former soldier who remains parlaysed in his bed at home while his mind accompanies Vesper on her travels. Like everything in this film which is usually presented as inanimate, the robot has a fleshy core – as do the giant pulsing jellyfish-like drones which flit through the forest. When one crashes, it disgorges the mysterious Camelia (McEwen); opportunistic suckers find her and start to feed from her flesh until Vesper arrives to rescue her, putting her own life in danger.

The power structure is clear. Camelia comes from the Citadel, although there are many Citadels. The elite ruling classes in these fortresses feed on the blood of children — giving rise to a sub-structure of power in the form of a baby farm run by Vesper’s brutal ‘Uncle’ Leo (Marsan) in the forest. He lives here with a feral, inbred gang of his own children, all involuntary donors: he swaps their blood for seeds. When the headstrong Vesper steals some, she unwittingly sets off a chain reaction.

Matters ecological are at the heart of this complex world-build: the instability of natural energy supplies drives the drama. Samper and Buozyte’s conceptualisation, the careful camera of Feliksas Abrukauskas, ingenious production design from Ramūnas Rastauskas and Raimondas Dičius, music by Dan Levy conspire to make. Vesper both more and less than a film at the same time. Is it an elaborate proof of concept for future iterations? One hopes so: something so delicate and well-crafted shouldn’t be left alone in the woods