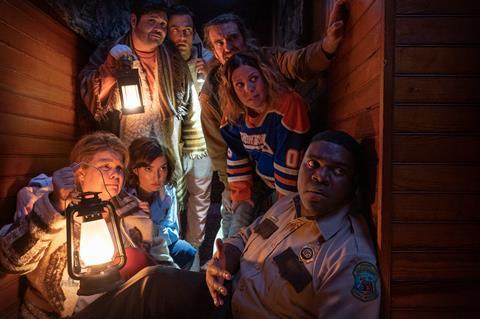 A werewolf is terrorising a remote mountain community, but are the residents actually more evil than the creature? The fitfully amusing Werewolves Within tries to wring some laughs from that satiric premise, but this horror-comedy isn’t inspired enough in either its commentary or its collection of colourful characters to have much bite. Sam Richardson shows off his delightfully understated demeanour as the lone voice of reason in this town of oddballs and malcontents, proving to be the most entertaining element of a strained whodunit that follows the locals’ anxious attempt to figure out who’s the lycanthrope in their midst.

Too timid for its own good

IFC releases the film in US theatres on June 25 following its premiere at the Tribeca Festival. Hardcore horror fans will be disappointed by the lack of gore, making this more promising a proposition for those who enjoy their scares heavily accentuated by jokes. Alongside Richardson, the cast consists primarily of recognisable television actors, including Milana Vayntrub and Cheyenne Jackson, so Werewolves Within (which is based on the virtual-reality game of the same name) seems likely to be a cult item rather than a serious commercial contender.

Richardson plays Finn, a nice-guy park ranger whose new assignment sees him moving to the quiet mountain town of Beaverfield, where he hopes to forget the fact that his girlfriend has decided they need “a break” because he’s not assertive enough. With a winter storm rolling in, Finn meets Beaverfield’s peculiar denizens, including a quirky postal carrier, Cecily (Vayntrub), and a scheming oilman, Sam (Wayne Duvall), who wants the townspeople to vote for his new pipeline, which will make them rich but endanger the environment. But the tensions within the community are amplified once a mysterious predator starts picking off locals one by one, prompting animal expert Dr. Ellis (Rebecca Henderson) to conclude that it must be a werewolf — and that the culprit is amongst them.

Directed by Josh Ruben (Scare Me), Werewolves Within takes its cues from the game, updating the setting from medieval times to the present while offering an Agatha Christie-style murder mystery in which everyone is a suspect. Like an irreverent horror riff on Murder On The Orient Express or Knives Out, the picture presents us with a cast of characters who are all outlandish and potentially guilty, although Mishna Wolff’s script fails to make the Beaverfield residents sufficiently memorable. Instead, they’re broad types, including a flamboyantly gay couple (Jackson and Harvey Guillen) and a bizarre shopkeeper (Michaela Watkins) who speaks in baby-talk to her dog.

With their petty behaviour and increasing paranoia concerning who is the werewolf, the squabbling characters are meant to make a point about the moral rot within seemingly wholesome small-town communities. But that’s a fairly obvious observation, and it doesn’t help matters that there’s not much pleasure in trying to guess which of them is the guilty party. That being said, it’s rewarding to see Richardson (so good playing the buttoned-down Richard Splett on Veep) in a starring role as the calm, unerringly polite Finn, who negotiates Beaverfield’s goofy array of weirdos with an unfailing patience. Finn isn’t a particularly original creation — he’s a goodhearted pushover who will discover his spine during this ordeal — but Richardson is adept at finding the humour in such a hesitant, mild-mannered fellow. (For instance, where others characters swear freely, he lets fly with a “Heavens to Betsy!” whenever he sees something disturbing.) The rest of the ensemble tends to oversell their underwritten roles, while Richardson accomplishes a lot by doing very little.

The werewolf is largely kept offscreen in order to build the suspense about which Beaverfield resident it is, and Ruben has a little fun keeping the attacks off camera, focusing on horrified screams rather than copious blood. But Werewolves Within’s peek-a-boo approach to its scares grows stale, missing the inventiveness or vicious execution that even a lighthearted horror film needs.

Richardson demonstrates a sweet rapport with Vayntrub, whose flirty Cecily takes an instant shine to this sincere, nerdy guy. Unfortunately, their budding romance gets pushed to the side once the subpar one-liners and madcap plotting take over. Werewolves Within argues that the real terrors are the ones all around us in the form of environmental destruction and our lack of empathy for our neighbours. But the film is neither funny nor frightening enough for those ideas to really land — like Finn, it’s too timid for its own good.

Screenplay: Mishna Wolff, based on the video game Werewolves Within