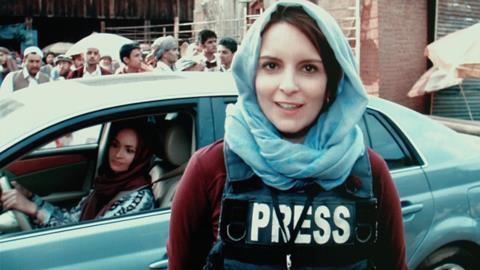 A professionally and romantically unsatisfied fortysomething gets her groove back through unconventional means — by becoming a war correspondent in Afghanistan — in Whiskey Tango Foxtrot, a thoughtful character piece that nonetheless turns a true story into a tepid, overly movie-ish misfire. Comic actress Tina Fey gives her most layered dramatic performance in this change-of-pace role, but Whiskey isn’t nearly sharp or stinging enough, and directors Glenn Ficarra and John Requa seem torn between telling a pat female-empowerment tale and more deeply examining the surreal reality of journalists embedded on the front lines.

Whiskey’s nagging irritation is that, deep down, the movie actually wants Kim to find contentment and romance, the story seemingly rigged so that these objectives are always at the forefront.

Opening March 4 in North America, Whiskey is a decidedly dicey theatrical prospect. Fey is perhaps best known for creating and starring in the acclaimed sitcom 30 Rock, and she’s had some recent film success thanks to December’s sleeper hit Sisters. But this Paramount comedy-drama set in the aftermath of 9/11 may face the same predicament as its journalist character in that not many people want to see stories about the war in Afghanistan. With a cast that includes Margot Robbie, Martin Freeman and Billy Bob Thornton, Whiskey will draw adult viewers, but because the movie is neither a frilly romantic comedy nor a searing Zero Dark Thirty-style investigation of US foreign policy, viewers may decide to wait for home video, making word-of-mouth even more crucial for this genre-blending curiosity.

Based on a memoir by reporter Kim Barker, Whiskey stars Fey as Kim Baker, an unhappy New York TV news writer who, in 2003, decides that she needs a change, volunteering to travel to Kabul, Afghanistan to cover the US war against the Taliban. (The slight changing of the real person’s name to Fey’s fictional character is an early indication the film has taken liberties with the true story.) Leaving behind a noncommittal boyfriend, Kim finds a new family in fellow journalists Tanya (Robbie) and Iain (Freeman), slowly gaining confidence as a wartime reporter who feels like she’s finally doing something meaningful.

Working with writer Robert Carlock, who has collaborated with Fey on 30 Rock and the subsequent Netflix series Unbreakable Kimmy Schmidt, directors Ficarra and Requa (Focus and Crazy, Stupid, Love.) seem at first to be aiming for a cynical political comedy, noting the irony in the fact that Kim’s bid for personal fulfilment comes while living in a nation that treats its own women as second-class citizens. There’s the potential for a smart rethinking of that familiar, faintly patronissing genre trope where a well-off, white Western woman travels to an exotic land to rediscover herself, but Whiskey’s nagging irritation is that, deep down, the movie actually wants Kim to find contentment and romance, the story seemingly rigged so that these objectives are always at the forefront.

The problem with such an approach is that it tends to obscure Whiskey’s more interesting elements. Having no experience in a warzone, Kim has to learn quickly how to do her dangerous job alongside battle-hardened Marines, but the harsh reality of her surroundings is mostly used as a way to gauge (and provoke) her personal growth. In other words, the treatment of Afghan women and girls, the senseless killing of innocent bystanders, and the questionable behaviour of some American troops are all merely a backdrop to Kim’s issues. Without question the filmmakers try their best to be mindful of their story’s greater global implications — at one point, another character derisively labels our heroine’s career/love dilemma as “white women problems” — and yet, Afghanistan is largely just a catalyst for Kim’s change, not something worth pondering on its own.

Despite that crippling liability, Fey is sympathetic as a sheltered woman who slowly becomes addicted to the excitement and risk of her new job. Surviving firefights and enduring colleagues’ deaths, Kim becomes hardened by the experience, and Fey capably delivers snarky rejoinders to the chaos around her while hinting at the hidden toll on her psyche. Still, this isn’t a particularly deep character, and even Kim’s growing thirst for bigger stories and greater danger comes across as fairly predictable, the journalistic equivalent of the thrill-seeking we’ve seen in military movies such as The Hurt Locker or American Sniper.

Whiskey boasts a formidable cast that invests these characters with real feeling, trying to sidestep narrative clichés. Freeman charms as a roguish photographer who becomes Kim’s lover. Robbie doesn’t have much to do as one of the few other female journalists in Afghanistan, but she brings an amusing brashness to her blunt character. Others fare less well, though. Playing an Afghan translator, Christopher Abbott exudes a sweet decency, but he’s more accurately portraying a moral compass than a flesh-and-blood person. Thornton is underused as a gruff Marine commander, while Alfred Molina barely escapes with his dignity playing an Afghan mover-and-shaker who has a dopey crush on the distant Kim.

At times, it’s possible to see the more emotionally nuanced film that Whiskey could have been: a study of journalists far from home who have lost touch with conventional life at exactly the same time as TV viewers are becoming progressively less interested in the stories they’re reporting. It’s to Ficarra and Requa’s credit that they try to juggle romance and political commentary, daring to make a studio movie that doesn’t fall into cookie-cutter genre rules. But the overriding problem is that Whiskey doesn’t go far enough in its risk-taking, settling for a story that gets more predictable as it rolls along. (Characters are put in peril and have conveniently timed changes-of-heart just when one expects they would.) Whiskey is bolder than most mainstream movies, but it’s not any better.

Screenplay: Robert Carlock, based on the book The Taliban Shuffle: Strange Days In Afghanistan And Pakistan by Kim Barker