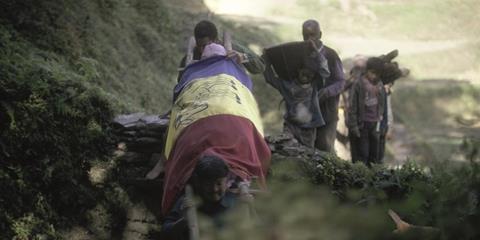 The accomplished second feature from director Deepak Rauniyar (Highway) looks at a Nepali community caught at odds between tradition and progress. It takes in the internecine divisions that result from the aftermath of the civil war. And it ponders the near impossibility of getting the corpse of a fat man through a small, first floor window (the dogmatic village elders decree that it would be very inauspicious to take him through the door).

Rauniyar handles the socio-political complexities of life post-conflict with a lightness of touch and flashes of absurdist humour. Much more than a photogenic ethnographic postcard from afar, this is a deceptively complex story of muddled allegiances and proscriptive social rules. A healthy festival life seems likely. Having premiered at Venice, where it won the Interfilm award for Promoting Interreligious Dialogue, the film showed in Toronto and goes on to screen in Busan. The novelty factor of the visually stunning Nepali backdrop could help the film’s theatrical propects with arthouse audiences with an appetite for promising new voices in world cinema.

The news of his father’s death summons Chandra (Dayahang Rai), an anti-regime Maoist partisan, back to the isolated mountain village of his birth for the first time in nearly a decade. Waiting for him is the woman who was his wife Durga (Asha Magrati) and a girl, Pooja (Sumi Malla), who believes that he might be her father. The seemingly idyllic community bears the scars of war. Children incorporate abandoned ordnance into their play. “It’s alright, there’s no firing pin,” says street orphan Badri breezily, as he brandishes a rusty landmine. Badri too suspects that Chandra might play a role in his paternity, thanks to the chatter of the village gossips.

Chandra arrives at a time of crisis. His father is dead and needs to be carried down to the river for cremation. But Durga, who nursed him until his passing, has had the temerity to touch the body. A woman, and lower caste to boot, Durga has tainted the whole house, huffs the local priest. Funeral arrangements are at an impasse – there’s a lovely shot of the village elders playing cards in the street, taken from the first floor window with the gradually ripening feet of the corpse in the foreground.

Tradition dictates that the corpse should be carried by the sons, so Chandra and his brother Suraj shoulder the burden of their dead parent. However, their political differences prove to be insurmountable – they fought on opposite sides during the war – and the body is unceremoniously dumped. As the acrimony boils over, Chandra finds himself bound by the very caste-based rules he sought to overturn during the war. Meanwhile the priest frets that the attrition of tradition means that ‘we will cease to exist’. He argues that it would be better to let Chandra’s father rot where he lies than permit the lower caste freedom fighters Chandra recruits to touch the body.

The story unfolds at a pace which reflects the gentle, unhurried rhythms of life in the mountains. Music is used sparingly, and usually where it logically fits into the narrative – the chants of the funeral procession contrast with riotous songs of a wedding celebration. But the soundtrack is full of the ambient sounds of village life – the rushing of mountain streams, chiming goats bells, skittering chickens and bird song. Peace is never quite as quiet as you expect it to be.