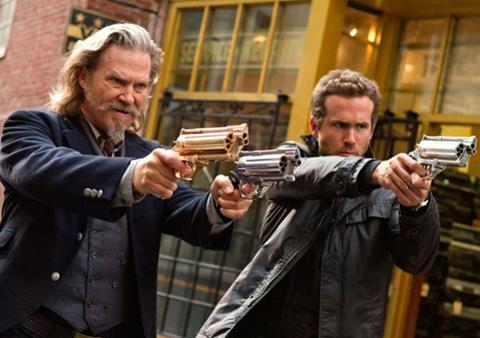 Transforming the supernatural into the subpar, R.I.P.D. aspires to the hip, zippy, irreverent spirit of Men In Black, but this effects-heavy action-comedy is simply too unremarkable to generate much of a pulse. Co-stars Jeff Bridges and Ryan Reynolds are not without their charms, but director Robert Schwentke (RED) has made a film that culls together marketable elements without ever really getting them to congeal into anything satisfying.

There’s no real spark or chemistry between Bridges and Reynolds, and the mystery the R.I.P.D. is trying to unravel boasts few twists or turns.

Arriving in the US on July 19, R.I.P.D. will probably be only the second most popular film this weekend to feature Ryan Reynolds—he’s also the lead voice in the animated family film Turbo. Barely screened for critics in advance and facing a crowded marketplace, this Universal offering will need to lean heavily on its stars’ bankability, although it would seem that R.I.P.D. will find more breathing room on cable and DVD.

Based on a Dark Horse comic, R.I.P.D. concerns Nick (Reynolds), a Boston cop killed by his dirty partner Hayes (Kevin Bacon). Angry at the betrayal, Nick enters the afterlife and discovers he’s been recruited by the R.I.P.D., a team of dead law enforcement officers who keep the deceased from residing among the living. He’s not happy about the situation, and he’s even more miserable when he’s teamed up with a 1800s Western lawman named Roy (Bridges) who doesn’t want to work with a rookie.

It’s not hard to notice the similarities between R.I.P.D. and Men In Black, which was also adapted from a comic book. In both, a young hothead partners up with a grizzled veteran to fight outlandish creatures and save an unsuspecting planet from unseen catastrophes. Additionally, in each case a smartass attitude pervades the proceedings, not to mention a mixture of scary, gruesome baddies and silly slapstick.

But whether it’s the dully “imaginative” design of R.I.P.D. headquarters or the strained banter between Nick and Roy, R.I.P.D. plays like an uninspired riff, grabbing the most successful elements from the Men In Black franchise and grafting it onto a humdrum story that’s part detective story, part buddy-cop caper and part caffeinated sci-fi extravaganza. Without funny characters or memorable action sequences, though, R.I.P.D. stumbles forward with a manic energy that’s less a headlong rush than it is a mindless cacophony of quips and explosions.

On paper, the two leads are well-suited for their roles, which would seem to nicely complement one another. Drawing on his growly performance in True Grit, Bridges (complete with cowboy hat, billy-goat beard and long moustache) portrays Roy as a cocky, ornery sonuvabitch who enjoys busting his young partner’s chops. Recalling his slow-burn exasperation from The Proposal, Reynolds makes for an agreeable straight man to Bridges’ antics.

The problem is that credited screenwriters Phil Hay and Matt Manfredi don’t give the actors characters to play—just opposing attitudes. There’s no real spark or chemistry between Bridges and Reynolds, and the mystery the R.I.P.D. is trying to unravel—which focuses on gold uncovered by Nick and Hayes that led to Nick’s murder—boasts few twists or turns.

No doubt Universal hopes to bring in extra dollars from pricier 3D screenings, but the film’s drab look doesn’t justify the added consumer expense. It would appear that a lot of effort was put into the digital effects used to create the dead ghouls, but it’s hard to get too excited when the characters themselves don’t have memorable personalities. But then again, not much else in this movie is memorable either.