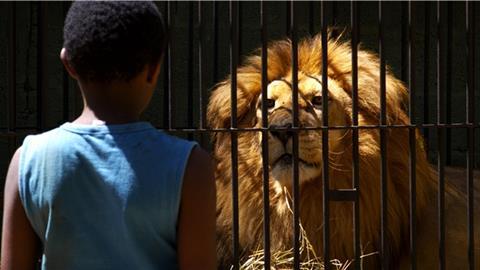 Paulo Sacramento’s impressively made film is boiling over with an admirable intensity and bubbling sense of eroticism, and while visually arresting at times its overly intense leads, lack of character development and tendency to be rather heavy-handed with its subtexts means that its strong visual work is let down by its unsubtle narrative.

There are some striking visuals used to reflect an undercurrent of frustration of anger but also there is some heavy-handed imagery that lacks depth of wit.

Riverrun (Riocorrente) makes great use of its São Paulo locations and for a chunk of the time the complex relationship between a free-spirited woman and her two lovers is intriguing, but in the end writer/director Sacramento favours visual cues rather than story development, leaving his lead characters straining for emotional meaning when all they appear is to be angry, frustrated and conflicted. The performances are suitably intense but never really explained, especially Simone Iliescu’s Renata who shimmies between her two very different men with barely a thought.

The heavily telegraphed premise is that against the striking backdrop of São Paulo each of the characters is heading towards their own personal crisis, with the film permeated with an undercurrent of tenseness. The film screened at Rotterdam in the Tigers Award section.

Motorcycle-riding and rather angry Carlos (Lee Taylor) is a car-thief trying to go straight and lives in a ramshackle apartment with young Exu, a street kid he has taken under his wing and is trying to help, while Marcello (Roberto Audio) is a steady and balanced intellectual art critic – which know he is ‘clever’ because he favours writing on an old manual typewriter when at home – who lives an ordered life.

They are linked by Renata who enjoys frequent sex with both of them, though at heart seems to favour the more rough-and-ready Carlos than the more restrained Marcello. Quite what she does or why she juggles these two very different men is never explained, with the film simply accepting that she flits between the two with barely a thought and simply driven by desire.

There are some striking visuals used to reflect an undercurrent of frustration and anger – such as when Carlos imagines his water bottle as a Molotov cocktail or a final scene when a winding river transforms into a river of flames – but there also is some heavy-handed imagery that lacks depth of wit. For example Carlos is seen walking on hot coals (get it) or Exu stares long and hard at a lion in a cage (caged animal anyone), for some reason randomly parked in the street.

The performances are pretty much one note. Carlos – sporting Wolverine style whiskers – is permanently angry; Marcelo (bald and bearded) placid and vaguely angst ridden, and Renata simply keen to be with her men. It is a film with a few lingering poetical moments, but never really enough to justify much more than showings on the film festival circuit.