Hitler is back  - and he will be sharing the screen with The Pope, Osama Bin Laden, Joseph Stalin, Vladimir Putin and Jesus Christ, as well as various dinosaurs . 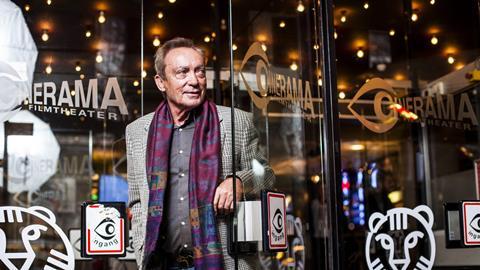 The new film shot in Antwerp.

“I have also a German Shepherd like Hitler had called Blondi,” Kier told ScreenDaily. “It was difficult to get one. I said to the director “It doesn’t matter. Get a stuffed one from London.’ We put it on a piece of wood with four wheels.”

In the film, Kier revealed, there is a scene in which the US President (a Sarah Palin lookalike) attends a conference with Stalin, Putin, Hitler and co. The scene ends with The President being eaten. “Not sexually. They’re going to eat her flesh. Then I take the biggest bone and I put it in the mouth of my stuffed dog.”

Like Iron Sky, the new film has been partially financed through crowdfunding. “There was a young lawyer from New York who paid $10,000 to be eaten by dinosaurs,” Kier said.

The 71-year-old actor himself did his bit for the crowdfunding push by shooting a short promotional video in which he appeared as a cowboy in the desert, brandishing a piece of paper which said: “I have to go back to the Moon. Please help me!”

Earlier in is career, Kier starred as Hitler in a short, Mrs Meitlemeihr (2002) set in post-war London, in which the Fuhrer was dressed as a woman and pestered by a randy Jewish neighbour.