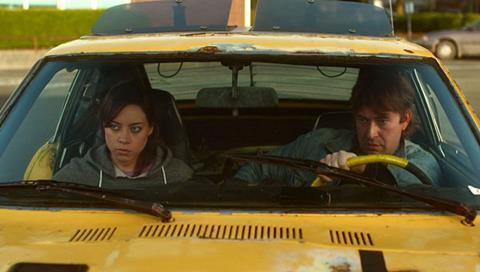 A classified advertisement placed by someone looking for a time traveling partner becomes the impetus for this highly entertaining low-budget comedy about trying to overcome our past mistakes. Directed and written by NYU film school first-timers Colin Trevorrow and Derek Connolly, who have a knack for comic zingers and satisfying sight gags, Safety Not Guaranteed marks an attractive industry calling card for the duo, who will no doubt be lining up their next gig in Hollywood shortly.

Most satisfying, and surprising, however, is the film’s crowd-pleasing conclusion.

We first meet our heroine, Darius (Aubrey Plaza), at her lowest, changing the toilet paper rolls at her magazine internship and accidentally dipping her hair in the toilet. A hardened cynic, with dark eyeliner, Darius has little to be happy about: Her mother died when she was young and she hasn’t had a boyfriend in ages.

During a story meeting at the magazine, a brazen young reporter named Jake pitches a story about the man behind the ad, and decides to recruit Darius, and another intern, the big-glasses-wearing biology student Arnau to help investigate.

After a series of humorous scenes of would-be detective work, Darius makes contact with the mysterious time traveler at his supermarket job, while stocking Campbell’s soup cans. Kenneth (Mark Duplass), slightly paranoid, but totally committed, is deadly serious about his “mission”—one that has to do with “regret, mistakes and love,” he says. At first, he doesn’t trust Darius, but over time, Kenneth begins to let her into his plans, training her for the big day when they will leap back to the year 2001 together.

While Darius infiltrates Kenneth’s world, and slowly becomes enamored by his nerdy survivalist ways, Jake confesses his real reason for wanting to visit the Seattle suburb: he wants to hook up with an old college flame who lives there. At first, the subplot seems made for mere laughs—Jake is shocked to discover that his ex- isn’t the young beauty she once was—but in a clever turn of the script, it becomes apparent that the misogynistic Jake is coming up against his own past and feelings of regret.

Meanwhile, Kenneth’s sci-fi lunacy increasingly looks less far-fetched, as two men in grey trench coats are tailing him, and Darius begins to genuinely worry for Kenneth’s safety, getting caught up in the fantasy herself.

If the movie is largely rooted in the comic repartee between the characters, the filmmakers also employ a few thriller-like elements with a grain of salt, playing with genre conventions, but never taking themselves too seriously.

While the humour in Safety Not Guaranteed isn’t the most sophisticated, and it’s hard to say whether jokes about Star Wars figures, Storm Troopers and time travel will travel outside of the US, the film also has an endearing sensibility, with a few carefully handled heartfelt moments. Aubrey Plaza, who has made a name for herself on TV’s Parks and Recreation, delivers a winning central performance, with equal bits of sharp-tongued banter and vulnerability. For his part, Duplass is utterly convincing as a wacko geek with major insecurity issues.

Most satisfying, and surprising, however, is the film’s crowd-pleasing conclusion. It has to be kept a secret, but suffice it to say, the scene must have multiplied the movie’s budget tenfold.