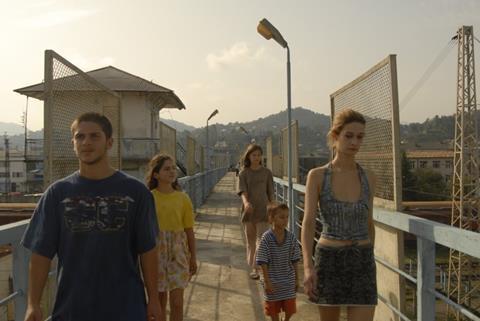 At first glance, Keti Machavariani’s stylish, but not very exciting, feature film debut looks like a collection of deadpan expressions walking up and down an unidentified Georgian harbour on the Black Sea. Nothing really changes in the course of the following 80 minutes, which offer some pretty landscapes but proceeds at such needlessly slow pace and hides its information with such tantalising insistence that many viewers will give up the guessing game long before it is over.

A few more breaches in the hermetic surface of the film would have certainly made it more accessible.

The unusual choice of a location rarely seen on screen, a distinct visual talent in capturing the right images, even if dwelling on them far too long, and a certain purity of tone may open festival doors but otherwise, prospects away from home look pretty bleak. Salt White (Marilivit Tetri) had its world premiere at the Karlovy Vary Film Festival.

Nana (Nino Koridze) waits tables in a restaurant during the day and in a night club after dark, hoping to make enough money through the summer season to open her own place in her own home town. Niko (Gagi Svanidze), a young policeman, picks her up one rainy morning on the open road and takes her to work, after asking permission from his superiors on the radio. Young Sopo (Fea Tsivadze) runs around with a bunch of homeless adolescents her own age, they sleep on the beach, steal food when they need it and roam around town aimlessly.

For reasons that are never quite spelled out, Nana falls for Niko who seems less than enthusiastic but nevertheless comes back for the sex. At the same time, Nana sort of adopts Sopo, and even tries to restore her lost identity, but the only thing that seems to interest the young girl are the white salt beaches she has seen only on a postcard.

By the end of the picture, all three protagonists leave town, Sopo to an unknown destination, Nana towards the white salt beaches she’s been told about by her friend and Niko whose police job takes to another location.

Sure enough, there are plenty of small, significant details to latch on along the way. Nana’s relations with the rest of the waitresses she shares the lodgings with; Niko’s concern for an ailing mother and a retired father and Sopo as the “agent provocateur” who finally gets the other characters to move.

The fluid camera work and the striking landscapes are helpful, but Machavariani’s montage decisions which keep every single shot going for about twice the necessary length and her acting instructions which impose a sort of fixed, angrily mournful look on the older performers and a constantly defiant stance on the younger one, are less than enticing, to say the least.

There is only one point in the entire picture, after Nana and Niko have sex by the road side, surrounded by imposing mountains on one side and the main road on the other, that a quiet, peaceful expression spreads over the woman’s face - a single moment of relaxation in the grim routine of her existence.  A few more breaches of this kind in the hermetic surface of the film would have certainly made it more accessible.