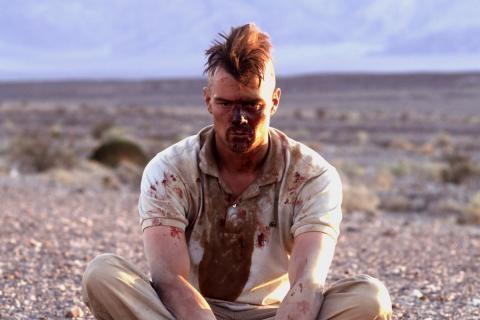 An impressively sustained two-hand drama about two guys stuck out in the desert who use the unplanned time together to tackle a few issues about their friendship, Scenic Route offers strong roles for Josh Duhamel and Dan Fogler, and while familiar in tone and structure it is watchable and well performed.

Josh Duhamel, playing against his regular action-hero roles and clearly relishing the new-look haircut and the chance to handle a dialogue-driven role.

Scenic Route, which had its world premiere at SXSW in the Narrative Spotlight section, smartly uses an interweaving structure to keep the dialogue-driven drama interesting and spirals off into some nicely integrated fantasy scenes towards the climax.

Josh Mitchell (Duhamel) Carter (Fogler) are life-long friends who have drifted apart. They are on a road trip in a battered old pickup owned by Carter, who “takes a scenic route” and decides to fake a breakdown so they can spend some quality time catching up. Mitchell is mortified, but Carter promises to get the engine running again…the trouble is that it isn’t as easy as he thought, and the pair find themselves stuck out in the desert.

Carter thinks that Mitchell should never have married wife Joanne (with whom he has a young son) and claims he has sold out into a steady and ordinary life, while Mitchell says Carter has never amounted to anything despite his potential, calling him a “30 year-old failure who lives in his car”.

Their desert-time veers between angry and affectionate with a little humour added for good measure. The high point comes when Carter gives Mitchell a Mohawk haircut (Mitchell says: ”I’ve always wanted a Mohawk like that dude from Taxi Driver”), with their situation descending into a type of madness with fights and delusions ensuing.

Directed with an easy style by the Goetz brothers – who have been directing commercials and music videos for some 13 years – the film is driven by a strong performance by Josh Duhamel, playing against his regular action-hero roles and clearly relishing the new-look haircut and the chance to handle a dialogue-driven role. Dan Fogler is a fine foil, and offers a nice balance to storyline.