Secret Cinema: Back to the Future, REVIEW

Dogged by cancellations, Secret Cinema has a lot to prove with its production of Back to the Future. Michael Rosser went back to 1955 to find out if it was worth the wait. 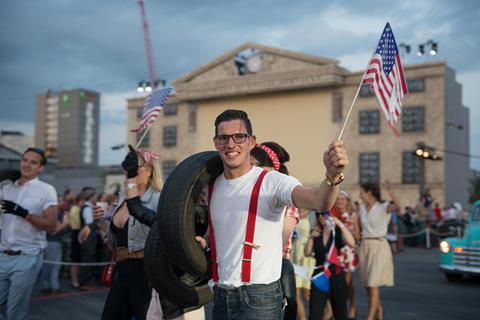 The organisers behind Secret Cinema must have thought at some point last week: “If only we had a time machine.”

After promising its most ambitious production to date with a show built around Back to the Future, the London-based event cinema organisation had to pull the plug at the last minute, disappointing thousands of ticket holders. No explanation was given, except that the production had not been able to meet technical requirements to satisfy local authorities.

A further three productions were cancelled and Secret Cinema’s most high profile production ever – with 42,000 tickets sold in just four hours, and around 80,000 overall – had become its most infamous.

So with the opening pushed to last night (July 31), there was a lot to prove. And proven themselves they have.

The production delivers fun, wackiness and spectacle in spades, bringing the very best of what Secret Cinema excels at into one packed night.

Arriving at the ‘secret’ meeting point in east London (although you can find out where on Twitter faster than you can say ‘flux capacitor’), there’s a good 15 minute walk and a lengthy queue before you’re in.

The experience of stepping back in time 70 years is much the same as Marty’s in the film… via old man Peabody’s farm.

After making the – not so long – walk into Hill Valley, the first spectacle of the evening is revealed.

The main square of Hill Valley, the fictional town in which Back to the Future is set, has been built in its entirety including Lou’s Diner, Hill Valley High School, the Texaco garage and that iconic Clock Tower.

As well as signing a form agreeing not to reveal the location, ‘surprise elements’ of the evening must also be kept under wraps so much of what Screen saw cannot be divulged.

But it is safe to say that there are plenty of places to explore and people to meet. Key characters can be found wandering the town, getting into fights and pursuing their “density’s”.

Once the venue is full of all 3,500 ticketholders, the atmosphere is charged to 1.21 gigawatts, with quotes from the 1985 classic being heard throughout the square.

Visitors should look out for the the occasional ‘glitch’, with elements of 1985 popping up throughout the town, but Screen found Lou’s Diner a great spot to grab a milk - “chocolate!” – while meeting a few key characters and watching activity unfold on the square.

However, the really exciting stuff comes when the film begins.

Rather than packing up their box of tricks and leaving the movie roll, the best surprises are saved for the main event. After one explosive moment early on, a total stranger turned to Screen and couldn’t help but share: “That was awesome!”

Having seen the film countless times over the past 30 years, it is difficult to imagine getting anything new from the movie. But Secret Cinema has done it. It puts a new, immersive spin on a timeless classic. It was worth the wait.

Secret Cinema Presents Back to the Future runs until Aug 31