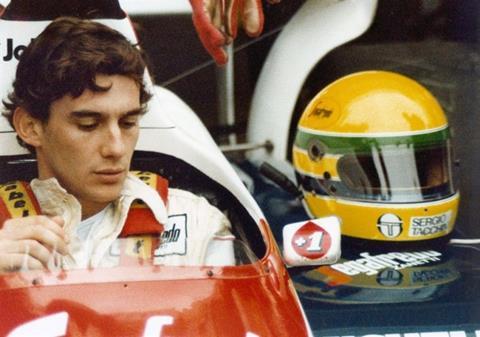 Senna is the fascinating, gripping and ultimately moving story of the motor-racing life of Brazilian Formula One driver Ayrton Senna, a man whose charisma and driving skills made him a legend on the track but who died in a tragic accident in 1994 at the Imola track at San Marino. The marketing push of Universal should see it garnering good reviews and solid box office, plus it is currently making the rounds on the festival circuit.

To a certain extent the film focuses on Senna from a Brazilian point of view, and smartly details his strident personality as much as his driving skills.

Director Asif Kapadia – who made features The Warrior and Far North – does a great job in assembling a plethora of archival footage and mixing in new audio interviews as he tells not just the story of the man but also the background to the political machinations of motor-racing that had such an impact on Senna and his career.

The film is thoughtfully scripted by Manish Pandey, with the story opening with the Monaco Grand Prix in 1984, the race that saw Senna truly appear on the world stage. He started from 13th on the grid in an un-fancied Toleman car and fought his way through the pack in the pouring rain and eventually passed the race leader Alain Prost in the 32nd lap. In the end, he lost the race on a technicality…but he had announced his arrival on the Formula One scene.

Senna made his way into the motor-racing scene via karting, but his was no clichéd ‘rags to riches’ story. He was born into an affluent family in Sao Paulo, but was defined by a gritty sense of determination, sublime driving skills and a spiritual faith. In Brazil he became an icon – important during the country’s tough economic period – but within the racing world his maverick sensibilities put him at odds with the establishment.

To a certain extent the film focuses on Senna from a Brazilian point of view, and smartly details his strident personality as much as his driving skills. Brazilian motor-sports commentator Reginaldo Leme is one of the key voices – along with Senna’s sister and mother – offering a fascinating perspective on Senna’s life and career.

Senna’s prodigious skills eventually brought him to the McLaren team, where he found himself racing alongside his team partner Alain Prost, then the world number one, and a man dubbed ‘The Professor’ due to his pragmatic attitude to what would help him win a race and a championship. The pair regularly clashed, and while Senna was a winner on the track he often struggled against what he perceived as injustices in the highly political sport, often coming up against Formula One’s then-president Jean-Marie Balestre, who also happened to be a friend of Prost.

The expertly edited archive footage offers a fascinating perspective on Senna, blending home movies with classic motor-racing shots, with film shot from Senna’s cockpit as his car speeds around the tracks especially thrilling.

The circumstances of Senna’s death are also handled with care. It was the third race of the 1994 season, at the Imola track in San Marino. During qualifying Senna’s protégé Rubens Barrichello crashed and was injured and a day later Austrian driver Roland Ratzenberger crashed into a wall and was killed instantly. Senna’s friend the F1 doctor Prof Sid Watkins suggested Senna shouldn’t drive, but he was determined to carry on with the race.

His car crashed at the high-speed Tamburello corner, hitting a wall at more than 130mph. Other drivers had crashed at the same spot and survived, but Senna’s car hit the wall at such an angle that part of the suspension flew back and punctured his helmet, causing fatal skull fractures.