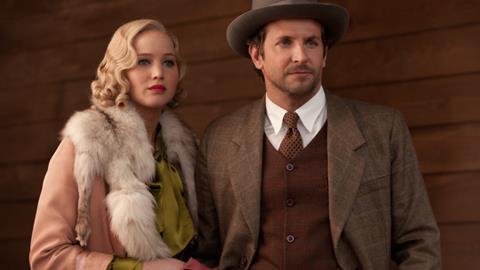 There was a time when the logging drama was a staple of Hollywood output, and there is no doubt there is an engaging old-fashioned melodramatic quality to Danish director Suanne Bier star-heavy film Serena. But despite the casting of Jennifer Lawrence and Bradley Cooper and the lush heightened drama that defines the film, there will undoubtedly be more talk about why it has been sat on the shelf since it wrapped in 2012 that the qualities of the film itself.

Its sheer melodramatic intensity makes it all rather watchable in a loopy soap opera sort of way, with Lawrence especially having a fine old time as an old-fashioned Golden Age femme fatale, all flowing blonde hair, slinky nightdress (perfect for wandering around the muddy lumber camp) and bright red lipstick.

Which, to a certain extent, is a great shame, because the film is rather watchable, defined by impressive performances, striking production design and lustrous cinematography. Its tall tale of ambition, passion, jealousy, violence and tragedy, largely set against the backdrop of a remote logging camp in 1926, just as the Depression is taking hold, is engaging enough, while it spirals towards an increasingly heightened melodramatic climax that ultimately never sits easily alongside the more balanced storyline of the first two-thirds of the film.

Serena, which screened at the BFI London Film Festival, is set to open in the UK later this month via StudioCanal, while Magnolia Pictures is set to release it in the US in 2015. There is a hint of Cold Mountain to its glorious outdoors backdrop and its lush and intense romance, but the core drama is more primal and the film less epic. What it is has in terms of marketing potential is the casting of golden duo of Cooper and Lawrence, filmed in heady embraces, which should help intrigue audiences.

Adapted from Ron Rash’s 2008 novel, the film pitches straight into the rough’n’tough lumber-camp life, where we soon see that logging baron George Pemberton (Cooper) is a determined but fair guy (he saves a logger from certain death within the first 10 minutes). Despite financial problems he is determined to carry on with his ambitious plans, but after a detour to ‘civilisation’ he sees and is immediately entranced by Serena (Lawrence) after watching her on horseback. She is a free and equally determined spirit, but she sees her match in Pemberton.

Before you know, the pair are married and heading back to his lumber camp in North Carolina (luckily she comes from Colorado lumber stock, though her family all died in a fire), though her arrival is met with dismissal by George’s business partner Buchanan (David Dencik) – the subtext is that the dapper Buchanan must be in love with George – and bemusement by George’s heavily pregnant once-lover Rachel (impressive Romanian actress Ana Ularu).  But Serena is one tough cookie, and is happy to face-up to Buchanan, and while after taking one glimpse of Rachel says to George:“Nothing that happened before even exists.”

A fine sentiment for this budding blonde femme fatale, but things don’t go overly well. Local sheriff McDowell (Toby Jones) is taking an environmental stance and is sniffing round bribes paid by George to officials; Serena loses a baby in a miscarriage; the banks threaten to withhold money and the loggers are being bitten by rattlesnakes. Plus George starts to take an interest in Rachel’s baby, much to the annoyance of the increasingly unhinged Serena.

Things do head off into melodramatic territory as Serena bonds with moody and droopy-haired hunter Galloway (a gloomy Rhys Ifans) who starts to act as her loyal henchman/killer. There is a poorly staged fight scene on a train and a final climax that features arson and a panther attack, but this final third feels too hectic and mannered, and verges on hysterical as the bodies start to fall and Serena’s mental instability takes over. But its sheer melodramatic intensity makes it all rather watchable in a loopy soap opera sort of way, with Lawrence especially having a fine old time as an old-fashioned Golden Age femme fatale, all flowing blonde hair, slinky nightdress (perfect for wandering around the muddy lumber camp) and bright red lipstick.

Bradley Cooper’s role is less showy, but his solid charm works well here and he convinces as a determined outdoorsman in the mould of John Wayne or Clark Gable. Shot in the Czech Republic, the cast also features a bunch of British actors nicely polishing their best American accents, while Ana Ularu makes a fine impact as Rachel and bodes well for her breaking into more larger scale films. The real strength of Serena, though, is the stunning cinematography by Morten Soborg and the perfect costume and production design which help reinforce the film’s old-fashioned melodramatic mood.

Screenplay: Christopher Kyle, based on the novel by Ron Rash