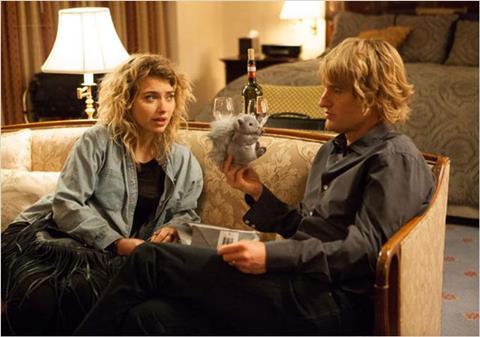 Peter Bogdanovich’s love letter to the type of freewheeling sex comedy that was staple Hollywood fare in years gone by is a real pleasure, blessed with a series of smart and knowing performances and driven by a frothy sense of mainstream fun. She’s Smart That Way, which premiered at Venice, might lack the sophistication of Woody Allen at his best, but it is a delightful return to form for Bogdanovich, reminding at times of his screwball classic What’s Up Doc?

Plus Bogdanovich smartly keeps the pace up, means there is no time to focus on the more preposterous aspects. Instead the focus is on easy laughs, smart lines, nice performances and a freewheeling sense of fun.

A strong ensemble cast seem to really embrace the broad comedy structure - it has a rather stage-bound feel - and he has cast performers at ease at providing the laughs, and while perhaps too old fashioned in tone to click with a youthful audience it could well find a welcome reception from older viewers ready to embrace its in-jokes and easy laughs.

The film’s interweaving story of romantic misadventures, happy hookers, obsessed old men and privileged showbiz types does feel like familiar classic Hollywood comedy fare, which of course isn’t a bad thing at all. Plus Bogdanovich smartly keeps the pace up, means there is no time to focus on the more preposterous aspects. Instead the focus is on easy laughs, smart lines, nice performances and a freewheeling sense of fun.

The film also allows yet another terrific platform for the talents of young British actress Imogen Poots, this time channeling her inner Mira Sorvino a la Mighty Aphrodite to play a New York escort girl with dreams of being an actress, whose chance encounter with an unusual man sees her life take a whole different change of direction.

The film is punctuated by her character Izzy recounting the story of her life to a cynical journalist (Illeana Douglas) and explaining how she first met theatre director Arnold (Owen Wilson), the man who ends up changing her life. He books into a plush Manhattan hotel and calls an escort agency, ending up spending the night with Izzy (or ‘Glo’, her escort name). In the morning he offers her $30,000 if she will give up being a prostitute and follow her dreams.

Impressed by his romanticism (and a whimsical do-your-own-thing philosophy that she embraces) she does exactly that. Complications almost immediately ensue when her very first audition is for the Broadway play Arnold is directing, starring his wife Delta (Kathryn Hahn) and Hollywood lothario Seth Gilbert (Rhys Ifans), who is in love with Delta and who also happens to have spotted Izzy leaving Arnold’s hotel room early in the morning.

In a similar fashion to What’s Up Doc? Bogdanovich layers in subplots and colliding characters a-plenty – including Jennifer Aniston’s amusingly brutal therapist; Will Forte’s love-struck playwright and a judge obsessed with Izzy, played by Austin Pendleton, who starred in What’s Up Doc? – but while he keeps his characters busy the film lacks the real sense of cinematic craft that defined many of his other films.

There are some nice cameos, such as Cybill Shepherd (who, of course, made The Last Picture Show, Daisy Miller and At Long Last Love with Bogdanovich) as Izzy’s mother; Joanna Lumley in a gag over the credits; Michael Shannon as a cop; British actress Lucy Punch as an Eastern European call girl, and even (in a good surprise it is true) Quentin Tarantino, but there is a niggling suspicion that overloading the cast simply covers that lack of fully drawn characters, particularly that of Owen Wilson’s generously manipulative man who sleeps with hookers and the tries to get them to follow their dreams…for what reason is never made clear.

The film had the working title of Squirrels To The Nuts, a reference – the becomes very clear at the end - to a mantra of do-your-own-thing philosophy from Ernst Lubitsch’s last completed film Cluny Brown, made in 1946, of which there is the appropriate extract at the close of the film. The line, from Charles Boyer to Jennifer Jones, goes: “Some people like to feed nuts to the squirrels, but if someone wants to feed squirrels to the nuts, who am I to say nuts to the squirrels?”