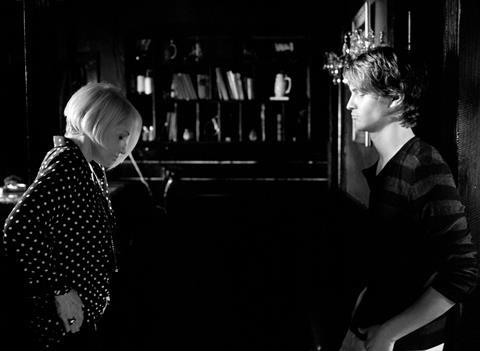 In Wild Tigers I Have Known (2006), Cam Archer used both experimental and naturalistic techniques to tell in vivid colour a story of frustration, that of a not-yet-out gay teen and the slightly older, straight macho man to whom he is attracted.

The prolific Barkin might expand the film’s potential, once word spreads about her gutsy portrayal of a burned-out cynic.

In Shit Year, the unattainable is once again his subject, with a few significant differences. The obsessed character, the actress Colleen West (Barkin, still sexy if somewhat reworked at 56), is the older one, and even though she beds for a while the object of her desire, the strikingly gorgeous newcomer Harvey West (Grimes), he abandons her.

The film’s style will limit it to the festival circuit and esoteric arthouse venues. The prolific Barkin might, however, expand its potential, once word spreads about her gutsy portrayal of a burned-out cynic.

Formally, Archer opts for black-and-white and he is sparer here than in Wild Tigers with the staccato scratchiness that has become an avant-garde trope, filming abstracted dream scenes in a relatively naturalistic manner.

The strategy is logical, because Colleen, who has just retired on account of the failed relationship, is so borderline unhinged that she can’t distinguish the real from the imagined. Given her state of mind, minimalist surreal scenes of her attempts to purchase a simulation of her ex-lover are almost credible.

Colleen’s sarcasm is democratic, aimed at everyone and everything. She tells bouncy Shelly (Walters), her new neighbor once she’s thrown in the towel and relocated to the countryside, that she sees her life as “a succession of contracts….How did ‘nothing’ become my ‘something?’”.

The camera is almost always on Colleen, whose self-absorption makes it appropriate, but when Archer does shoot Harvey, whether in extreme close-up or, with the young man clad only in tight swimming trucks, in long shot, the director reveals a compulsion as intense as hers.

More ethereal than earthy, Harvey comes across like one of Warhol’s androgynous young men. Perhaps Colleen embarked on the ill-fated affair as an act of self-destruction, a therapeutic involvement that would enable her to hit rock bottom, exit from a successful but soul-searing career, and discover some kind of rapport with the world. By the end of the film, she is no longer making fun of sweet Shelly and her apple dolls, but opening herself up for some kind of friendship.