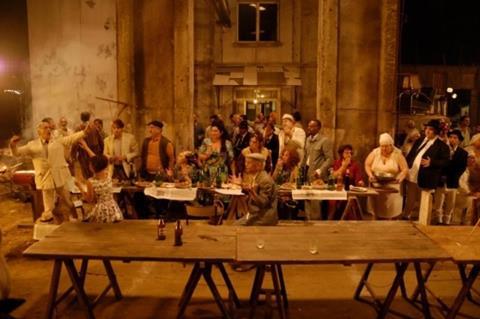 Probably the most expensive but also the most confusingrecent project of the Romanian cinema, this phantasmagoric extravaganza by one of thecountry’s best known and respected stage directors leftmany of its viewers at home bemused and may raise similar reactions when shown outsidethe country.

This being Purcarete’s first film foray, he keeps moving the camera to remind the audience it is not a static stage performance, but the result still looks spectacularly theatrical.

A work in progress for several years and released in Romania to devastating reviews by the local media, the film was distributed by its producers, Libra Films, who opened the film in theatres rather than cinemas, and did far better than expected given the initial reactions. The film screened at the Transilvania International Film Festival in Cluj.

If one dares to make a wild guess at this metaphorical experiment, from the look of it, the film seems to be Purcarete’s own very intimate and personal summing up of his own career, launched during the communist regime and reaching what may be considered as a moment of crisis in the present.

For all purposes, Palilula is a figment of Purcarete’s imagination, the people in it are evidently symbols and the premise, but only the premise, might sound almost like one of the Chekhov plays Purcarete directed on stage  – a young doctor, Serafim (Aron Dimeny), is sent to a temporary job in the remote town of Palilula.

He is a freshly graduated gynecologist dispatched into a town where no children are born, which he reaches in the heart of winter, riding in a steam locomotive which picks him out in the middle of nowhere and delivers him smack in the town’s central square, just as an autopsy of the legendary and recently departed Dr. Pantelica, whom Serafim has been sent to replace, is performed for the gratification of the entire population, including Pantelica himself who keeps winking from the operating table..

This is just the beginning of a long string of unrelated, wild, sometimes colourful, occasionally amusing and more often bewildering events, all of them probably reflecting on Purcarete’s own artistic life and the various professional and personal encounters he had through the years. The medical chaos ruling the hospital whose staff Serafim has joined may very well reflect on the theatre world the author has been a part of.

For those in the know, there are evidently relevant details being planted throughout the film, such as the black-faced doctor (Sorin Leoveanu) and his affair with the wife of a Hungarian engineer; the surprisingly inoffensive Party secretary (Constantin Chiriac) whose teeth are out before he gets married to a much younger blonde or the foul- mouthed sarcastic pathologist (Razvan Vasilescu) .

Possibly intended by its author as his own 8 1/2, Purcarete’s film misses one crucial point - it doesn’t seem to care one little bit about any of his characters, including Serafim who most likely is supposed to represent the author himself. Instead there is a vast gallery of grotesque caricatures, sometimes bordering on the vicious. Even when he has a certain amount of sympathy for some of them it is of the paternalistic, condescending kind, unjustified even if he doesn’t treat himself better than the others.

His large cast, including some of the better known names of the Romanian stage, play it all as an oversize circus performance, supported all through by masses of imaginatively fashioned sets and costumes. This being Purcarete’s first film foray, he keeps moving the camera to remind the audience it is not a static stage performance, but the result still looks spectacularly theatrical.