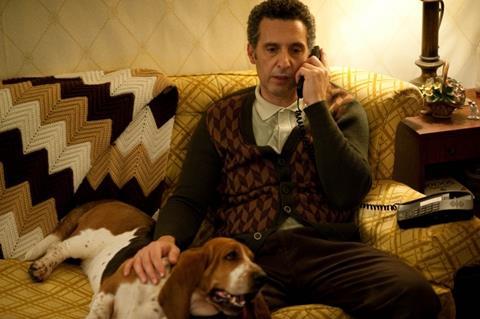 John Turturro and his wife Katharine Borowitz play the leads in this reworking of a film by the late Theo van Gogh entitled 06 (1994), about two persons striking up a strange kind of affair on a sex line.  Michael di Jiacomo’s version of the script has Borowitz as Patricia, an agoraphobic 48 year-old woman who won’t step out of her flat and Turturro as a simple-minded middle-aged courier living in Brooklyn and desperate to have some kind of sex before he goes to his grave. Though neither of the two characters is sufficiently probed into, at least the solid performance of the two actors provides sufficient attraction for a modest commercial release.

Wooly (Turturro) has tried several times the phone service to get some decently spicy conversation going - that is conversations that would be dirty enough, but also real enough to satisfy his need for alternative sex and sympathy at the same time. But somehow he always says the wrong things and finds himself disconnected before he can get any satisfaction out of the call. The film world premiered out of competition at the Karlovy Vary Film Festival.

Until, that is, he is called back by Patricia (Borowitz), whose last meaningful relationship was a steady, weekly exchange of letters with a man from Kuala Lumpur until he suddenly stopped writing, obviously - she thinks - because he was crushed down by a giant tree on his way back to her.

She is looking for companionship rather than intimacy and is not quite ready to engage in phone sex from the first moment. But he is willing to wait and the conversations they engage in soon indicate she is a closet intellectual who loves to air her romantic notions from the safety of her own four walls, while he is a natural poet whose language may be uncouth but whose sentiments are never less than lyrical.

As they keep talking, they sort of imagine their first date, their first quarrel, even their first kiss, while each one is hanging on his or hers respective end of the line. Conscious of his personal shortcomings, he tries to improve the image he projects in these conversations. He calls himself Leroy and even introduces his canine companion, a Basset of dubious descent called Amazing Helmut, as a massive German dog. The real crisis erupts when, after having explored all the possibilities of the phone lines, the only inevitable next step left to break down their solitary confinement is to meet, the ultimate test that will show if desire can indeed overcome the inherent fears buried deep down in each one of them.

The material, locked as it is within the confines of two flats, would probably be more suitable for the stage, and the writing could have done more to round up each one of the protagonists and their respective backgrounds. Taking the camera outside several times and the addition of few characters, particularly the soulful Amazing Helmut, serve as moments of comic relief rather than contributions to the plot.

But Turturro, whose unusual screen persona is never less than fascinating, remains inimitable. With him, the weirdest actions look plausible and the most plausible are easily turned into weird. Just watch him dance the cha-cha with his feet stuck in a water-filled basin or sweep his partner into the illusion of picturesque scene of an evening on the beach culminating in the most romantic kiss – all this in a phone conversation. Borowitz more than holds her own in his company, together they work like a couple of experienced troopers who never miss a beat.  They keep the show going.