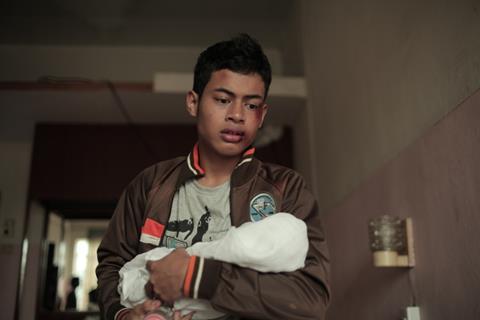 A freewheeling crime drama set against the postmodern metropolis of Kuala Lumpur, Songlap teases with its gangster subplots and moment of old-fashioned melodrama, but delivers when it comes to a breezy energy that makes the most of the impressive locations. The film screened at the Abu Dhabi Film Festival.

As a simple story of family bonds and redemption Songlap is engaging and watchable and points to new directing talent from the region.

The iconic landmarks of Kuala Lumpur make for a jarring counterbalance to the gritty and seedy urban spots where brothers Ad (Syafie Naswip) and Am (Shaheizy Sam) scrape together a meagre life as brokers and couriers for a black market baby trafficking network.

The brothers, who essentially raised themselves, are clearly fond of each other despite being very different personalities. Am hates the fact they are trading in infants, and dreams of being a street dance champion. Gambling obsessed Ad tries to put money aside so they an eventually have a better life, but his addictions lead to trouble with local mobsters to whom he owes money.

Am also spies on his prostitute mother who has had nothing to do with the brothers since they were very young. Things take a turn for the worse, when Ad’s best friend dies of an overdose and he begins to feel responsible for the dead man’s sister Hawa (Sara Ali) is pregnant

After running away from home and her obsessive taxi-driver father she falls into the net of the baby-trafficking network. Ad wants to get her to safety, but it becomes clear that defying Mama, the ruthless head of the organisation will bring nothing but danger as the two brothers try and protect themselves as Hawa.

As a simple story of family bonds and redemption Songlap is engaging and watchable and points to new directing talent from the region.

Co-directors Effendee Mazlan, Fariza Azlina Isahak direct with a strong feel for the genre, and while the ‘prostitute-mother’ sub-plot flies close to melodrama and may be a strand too many the film is at its best when showing the criminal sub-culture set against the gleaming skyscrapers that dominate the Kuala Lumpur skyline.