EXCLUSIVE: Founder and CEO Matt McCombs and his sales team head to Santa Monica with a sales roster featuring Gabriel Byrne and Harvey Keitel, among others. 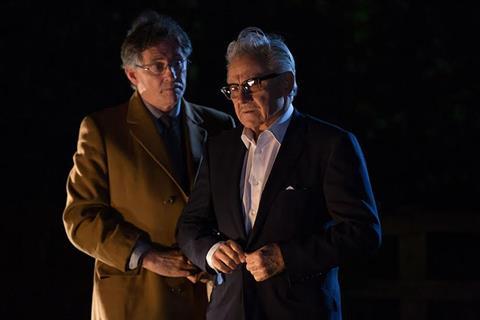 The pair star in Lies We Tell, (pictured) about the driver of a recently deceased businessman who lands in hot water when he attempts to save the family legacy and cover up his employer’s affairs.

Mitu Misra makes his directorial debut and the film by Bradford International Film Associates is in post-production.

The film centres on an affluent family living at a time when the Sun’s death threatens to destroy mankind. Spotlight will screen the film at the market.

The film was digitally released in North America across all VOD platforms last week via Electric Entertainment.

Goonworks Films’Fantasia premiere The Unseen follows a man who is becoming invisible but must risk exposing his secret to rescue his kidnapped daughter. The sci-fi horror will make its Los Angeles premiere on Tuesday (October 25) at Screamfest.