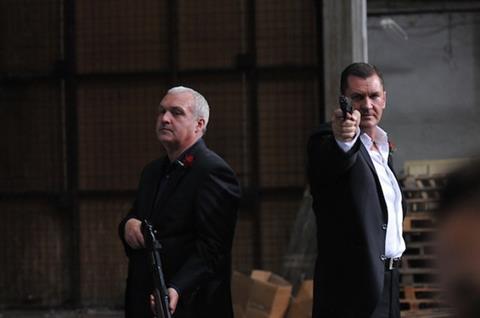 British low-budget gangster films tend to turn up with alarming frequency, and while hardly an Oscar-winning classic, Frank Harper’s slickly made St George’s Day delivers the crime-drama goods without resorting to simplistic and brainless violence and knuckleheaded dialogue.

St George’s Day is rather watchable and delivers some well-structured drama and thrills as well as some nicely thuggish performances.

Likely to fare far better on home entertainment that on the big screen in most territories, it will appeal to those distributors with a fondness for British crime films.

Harper, who has been a regular in gangster flicks himself over the years, also takes the lead role of Mickey (or ‘Mad Mickey’ as he is affectionately known by friends and foe alike), and genially brutal London gangster who loves his family business and has a big drugs deal with his cousin Ray (Craig Fairbrass) in the pipeline.

Things go badly wrong with the deal, and Mickey and Ray (who wants to get of the business and invest in a golf complex) find themselves up against rather brutal Russian gangsters as well as a determined police officer.

The pair head to mainland Europe where they hook up with their Dutch friend and fixer (the impressive Vincent Regan) – which leads to a little lap dancing action and involvement in a diamond deal – while also using an England football match against Germany to be played on St George’s Day as cover.

There are moments when cliché threatens to overshadow the script, but St George’s Day is rather watchable and delivers some well-structured drama and thrills as well as some nicely thuggish performances.