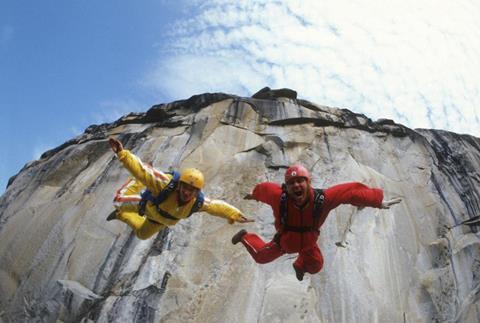 A portrait of Carl Boenish, a California man who in the 1970s and ‘80s popularised skydiving and founded the BASE jumping movement, Sunshine Superman captures both the awe and terror of the sport he loved until the day it brought about his death. Certainly the most vertigo-inducing documentary since Man On Wire, Sunshine Superman does a solid job chronicling this lovable eccentric through interviews with friends and his widow, resulting in a breezy, engaging film that gently asks deeper questions about humanity’s fascination with pushing the extremes.

Sunshine Superman movingly retraces the man’s final days in all their irony and mystery.

Playing at the Toronto Film Festival, Sunshine Superman would seem to be a natural for theatrical release, with cable and other platforms sure to be welcoming as well. Considering the continued interest in skydiving and its offshoots, the film should attract extreme-sports buffs, especially since filmmaker Marah Strauch doesn’t condemn its practitioners in light of Boenish’s tragic end.

Sunshine Superman traces the history of Boenish, who grew up in Southern California and was stricken with polio as a boy. Despite that — or, perhaps, because of it — he developed into an adventurous, athletic, inquisitive man who could play the piano, make films and earn a living as an electrical engineer. But his true passion was skydiving, which he eventually parlayed into a career when he started strapping cameras to his and his colleagues’ helmets when they executed their jumps off cliffs and then, later, tall buildings.

Utilising a relatively straightforward approach that combines talking-head interviews, period rock songs and extensive use of Boenish’s gorgeous film archives, Sunshine Superman is primarily a look at a man who proudly insisted that he didn’t want to grow up. His inspiration was children, whose endless curiosity and excitement are unencumbered by the reality of what is and what is not possible.

Strauch’s interview subjects paint Boenish as a warm, geeky individual, the sort of person who never fully connected with anyone until he met his wife Jean, who became a jumping enthusiast alongside her husband. (Described as a bit of an odd duck herself, Jean serves as this documentary’s thoroughly thoughtful, lively centrepiece, still full of love and admiration for her husband 30 years after his death.)

The opening reels are some of the strongest as Sunshine Superman deftly balances between documenting Boenish’s rise as a skydiving guru and explaining how unusual his interest was in the 1970s. Period footage of interviews Boenish gave with local and national television outlets speaks to the alarm that outside observers expressed about his hobby. (Most people seem convinced he’s nuts, although the movie strongly makes the case that his interest in skydiving had more to do with freedom and the euphoric rush that comes from jumping.)

As the documentary moves along, we learn about his inspiration for forming BASE, as well as the meaning behind its acronym, and see how Boenish saw himself as a filmmaker who was chronicling his and his friends’ jumps as a way to show the world about the joy inherent in risking one’s life. But Strauch doesn’t view him as a reckless daredevil: Boenish emphasised a respect for the unwavering laws of nature, and Sunshine Superman suggests that he was always cognizant of the dangers involved in jumping.

Still, that didn’t keep him from doing nerve-wracking things to get the perfect shot, including constructing a makeshift ladder that allowed him to hang over the edge of a cliff on a bicycle seat in order to film jumpers as they made their leaps. Not surprisingly then, Boenish’s footage is the star of Sunshine Superman, offering endlessly beautiful images of human bodies hurtling themselves into the abyss, only to be saved by their parachutes. Without overselling skydiving, the film sufficiently convinces us why men like Boenish would find it liberating, a way to get in touch with the most primal sensations of panic and ecstasy as life and death hang in the balance with each jump.

Considering that many will not know the particulars of Boenish’s death in 1984, Sunshine Superman movingly retraces the man’s final days in all their irony and mystery. (As throughout the documentary, recreated scenes are handled here with understatement, which is a relief since the same technique in other nonfiction films can sometimes be jarring or unconvincing.) Sunshine Superman can’t quite reconcile the senselessness of Boenish’s demise, but perhaps that’s appropriate for a film about a man who happily lived an unconventional life — all the way to his last breath.