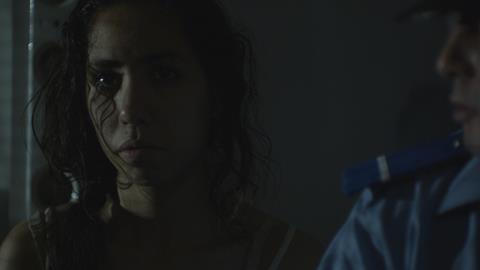 It is a cleverly made film, with a beautifully shot dramatic climax.

Balancing plenty of dark close-ups - when the women are out at night - balanced with starkly bright scenes of them at work in a soulless shrimp factory, the film offers a pacy and often decidedly unnerving glimpse into life in Tangier, eschewing any predictable scenes of the historic town and focusing on the underbelly of the city.

Jittery, obsessive and edgy Badia (Issami) and her more mellow friend Imane (Bahmad) work daytime peeling shrimps in a Tangier factory, but at night turn tricks and make a little cash on the side by stealing items - ranging from clothes to electronic goods - from their ‘clients’.

At one ‘party’ they meet two other young women, Asma and Nawal (Akel and Betioui), who as well as turning tricks happen to work in the Free Zone of Tangier - the area of the city that is defined as European, and only accessible to those with an appropriate work permit. Badia dreams of working in the zone, seeing it as possible springboard (possibly the link to the film’s title) to a more material world.

The foursome see the chance to access men in upscale oceanfront houses and highscale bars, but it also brings them closer to danger from other opportunists and gangsters. Badia plans a scheme to steal boxes of iphones as moneymaking scheme that could help her finally make it to the Free Zone.

Soufia Issami is the jittery and complex core of the film, never sleeping but rushing between work and her nighttime encounters and obsessively scrubbing herself, in a bid to wash off both her work at the shrimp factory and her sexual encounters. The camera often tracks her in extreme close-up, her unsmiling face and tense demeanour offers fascinating clues to her steely determination and sense of self-containment.

In fact the women performers are universally excellent - offering up a glimpse into the life of contemporary young working women desperate to find a way out of the drudgery of their lives. Leila Kilani (who made documentaries in Tangier) directs with a distinct sense of place and cleverly shoots the nighttime sequences with a sense of pace and slight close-up seediness, which contrasts elegantly with the wide angle shots (reminiscent of Nikolaus Geyrhalter’s food-production documentary Our Daily Bread) of scores of women in a brightly light room all dressed in white coats, hats and masks, shelling bucket loads of shrimp.

It is a cleverly made film, with a beautifully shot dramatic climax that fits perfectly with moodiness and edginess of the oddly bleak but fascinating story.