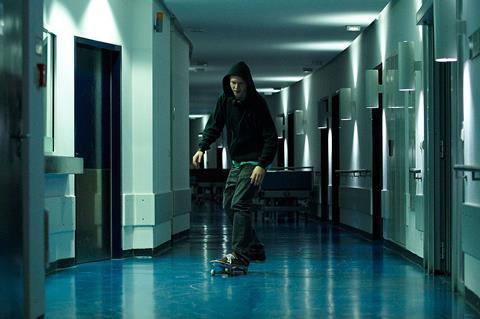 An ‘unhappy family’ story about illness, grief, teenage alienation and darker stuff besides, Swans is a relentlessly downbeat exercise that has moody elegance to spare, but will test the patience of all but the hardcore of ‘slow cinema’ aficionados. This second feature by Berlin-based, Portuguese director Hugo Vieira da Silva - following 2006’s Body Rice - is an austere study in mood and sketchily evoked psychological interiority, but in terms of communicating with its audience, it feels as hermetically enclosed as its sullen teenage protagonist. Sales potential is slender, but Swans will nest comfortably with festivals inclined to the starkly introspective.

Swans ultimately registers not merely as downbeat but as defiantly introverted.

The film begins with a middle-aged man (Herforth) - named Tarso in the credits - and teenage boy Manuel (Hillebrand) arriving in Berlin. It is only after a while that the film, leisurely in doling out information, establishes that they are father and son, and have come from Lisbon to visit the boy’s mother Petra (Schuster) - from whom Tarso has long been separated - in hospital, where she is in a coma following intensive chemotherapy.

During their stay, Tarso and Manuel move into Petra’s flat, sharing the space with her taciturn, seldom seen, Asian housemate Kim (Siriviriyapoon). Tarso, deeply affected by events, spends much of his time sleeping or in a semi-stupor in front of the TV. Manuel, meanwhile, seems totally detached, and retreats into his favourite occupation, skateboarding, with or without the accompaniment of hip-hop or punk soundtracks. In quieter moments, the boy starts taking an interest in the female effects around the flat, and a masturbation scene serves as prelude to an unexpected turn into the sexually transgressive area more usually associated with French than German cinema (Catherine Breillat, Christophe Honoré).

However, because of the overall affective numbness induced by the film’s style, these edgier sequences are thematically transgressive without having the emotional charge that normally comes from the challenging of taboos.  Two surprise scenes in particular - one a wordless bathroom moment involving Kim, the other a brief eruption of violent conflict - feel awkwardly incongruous in this anaesthetised context.

Shot in a radically reduced palette dominated by metallic greys, the film is nothing if not stylistically coherent, especially with its distinctive sound design (Daniel Ibarren and Manuel Laval), in which oppressive swathes of silence are set against characters’ breathing and the robotic whirr of automatic doors and other hospital equipment.

Among the cast, Herforth gives a solidly downbeat performance while Hillebrand is a striking, moody presence whom the camera loves, but the limitations of the role never allow him to suggest that Manuel is more than a self-absorbed moper straight out of Larry Clark/Gus van Sant casting.

The boldest performance is that, wordless and virtually motionless, of Schuster, who, as the bedridden mother, allows herself to be reduced almost to the status of human sculpture. Swans - in press notes, the director makes a point of refusing to explain the enigmatic title - ultimately registers not merely as downbeat but as defiantly introverted. The effect is that of watching potentially harrowing events through the sealed and protecting windows of an intensive care unit.