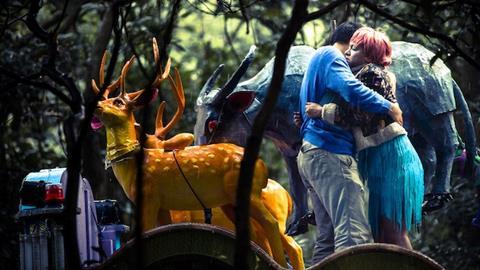 The omnibus Taipei Factory boasts an intriguing cross-cultural premise that, unfortunately, is only moderately successful in its execution. A collection of four 15-to-20-minute shorts — each one pairing a young Taiwanese director with a filmmaker from another country — this collaboration (the brainchild of the Director’s Fortnight at Cannes and the Taipei Film Commission) features light comedy, character drama, and even a pseudo-documentary. The results have a loose, bracing freshness to them, but it’s a pity that more of the individual films don’t shine.

Taipei Factory was put together rather quickly, each filmmaking team given less than three weeks to script, film and edit their project on a very limited budget in the spring of this year.

Taipei Factory doesn’t offer any name directors or international stars in the cast, severely limiting the film’s theatrical prospects. But that hardly seems an issue for a project this adventurously planned and orchestrated. Rather, the movie seems a natural for festivals and cultural institutions, hopefully opening the door for more alliances between directors from different lands in the near future.

Set around Taipei, the four shorts are standalone films with no wraparound characters, actors or overt themes. In The Pig, an impoverished man (Dawang Huang) copes with the death of his prized pig during a terrible dry season that threatens to destroy his community. Silent Asylum chronicles a series of seemingly real people as they relate their tales of escaping from Burma to a documentary filmmaker. The pensive A Nice Travel concerns the final days of a young woman (Chu Chih-Ying) who’s about ready to move out of town, leaving behind unresolved questions about her love life and family. And Mr. Chang’s New Address, the strongest of the set, finds the title character (Jack Kao) coming home from visiting his mother to discover that his house has completely vanished except for his front door.

Taipei Factory was put together rather quickly, each filmmaking team given less than three weeks to script, film and edit their project on a very limited budget in the spring of this year. The Taiwanese directors are collaborating with counterparts from South Korea, France, Chile and Iran, and because this octet’s previous films aren’t readily available, it’s impossible to know whose influence is felt more strongly in each short. With that in mind, this compilation film is best approached as a fun creative experiment that has allowed these directing duos to try unconventional, sometimes non-existent narratives, relying on mood and brevity to substitute for depth and emotional resonance.

But an open mind going in to Taipei Factory can’t fully shield the fact that the cumulative experience is somewhat underwhelming. The Pig, by directors Singing Chen (from Taiwan) and Jéro Yun (from South Korea), is perhaps most representative of this compilation movie’s strengths and weaknesses. Incorporating a gentle, melancholy tone, their film is a touching, understated look at several lost souls trying to make some sort of connection during desperate times. (Huang’s face registers every form of beaten-down sadness imaginable.) The Pig is engaging during its running time, but it fails to linger in the memory, tempting one to wish that the filmmakers could have had more time to develop their slight story.

With that said, even the weakest of the four, Silent Asylum and A Nice Travel, are passionately constructed, albeit in ways that tend to be less insightful than their makers might hope. Midi Z (Taiwan) and Joana Preiss (France) play with documentary reportage for their fictional story in Silent Asylum, but the exercise feels intellectual rather than emotional or ingenious. And with A Nice Travel, directors Shen Ko-shang (Taiwan) and Luis Cifuentes (Chile) strive for an impressionistic snapshot of a life, but the individual moments fail to coalesce into a meaningful character portrait.

For all the serious intent presented in Taipei Factory’s first three chapters, it’s noteworthy that the finale, which is the most light-hearted, is the most effective. Directors Chang Jung-chi (Taiwan) and Alireza Khatami (Iran) slyly construct an apt metaphor for a man’s disillusionment through the literal disappearance of his home. With an impish magical spirit that slightly recalls Woody Allen in Purple Rose Of Cairo or Zelig mode, Mr. Chang’s New Address is lightly comic, but it’s also rather wise about the quiet terrors that visit us once we lose the building blocks of our identity. And it contains one of the compilation’s best performances: In less than 20 minutes, the wonderfully pokerfaced Kao goes from anxious to confused to outraged to discouraged to unexpectedly accepting of his bizarre, but somehow universal plight.