Ted Sarandos named chair of Academy Museum board of trustees 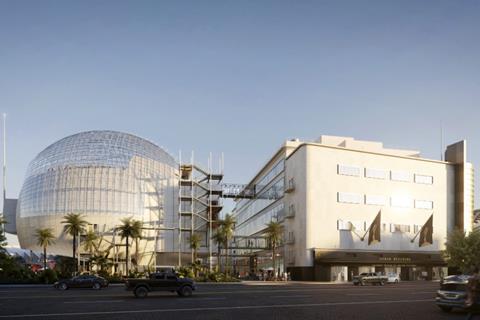 Netflix co-CEO Ted Sarandos has been named chair of the Academy Museum board of trustees in the wake of embattled former studio head Ron Meyer’s exit from the role last month.

Sarandos most recently served as vice-chair and stepped in as acting chair last month after Meyer quit the Academy Museum and his post as NBCUniversal vice-chairman after reports involving an affair.

Following the board meeting today (September 15) Miky Lee has been named vice-chair, Paramount CEO and chairman Jim Gianopulos treasurer, and Kimberly Steward has been re-elected secretary.

After reports of funding difficulties, and delays exacerbated by the pandemic, the Academy Museum is scheduled to open on April 30, 2021.

Architect Renzo Piano designed the Museum, a restoration of the Saban Building in the Miracle Mile district of central Los Angeles.

A new spherical structure under construction will connect to the Saban Building via glass bridges and will feature the 1,000-seat David Geffen Theater and the rooftop Dolby Family Terrace.