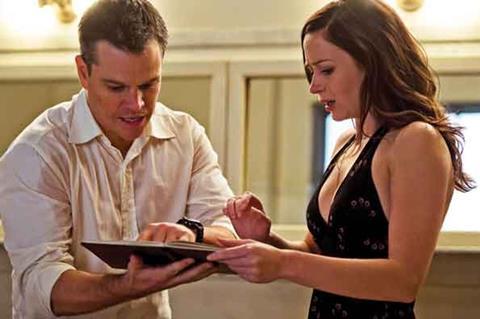 Forget the dressing and the notion that The Adjustment Bureau is a sci-fi adventure along the lines of Inception or The Matrix…in fact this impressively performed film is at its heart a love story – yes there are fantasy elements and a whole lot of running about, but this romantic thriller is really just about how the power of love can overcome all obstacles.

The Adjustment Bureau is never played as a thriller – though there are moments of thrills – but rather as a sophisticated romantic adventure with a side order of fantasy.

If the marketing can reach out beyond the Matt Damon action fans and harness the interest of couples – or in fact pretty much anyone who likes an extremely well made movie – then The Adjustment Bureau could well click at the box office.  Good reviews and some strategic festival exposure will help, though the only issue may be if audiences think they are in for an all-action romp.

The pairing of Matt Damon (never more at ease and charming) and Emily Blunt (vivacious and wonderfully charismatic) is the beating heart of the film, while surrounding it is an elegant style in terms of production design and costumes, a smart and witty script and just enough moments of thrills and fantasy to hold the attention.

George Nolfi makes his writer/director debut with The Adjustment Bureau (previously he scripted Ocean’s Twelve and co-wrote The Bourne Ultimatum), which is based on Philip K Dick’s short story Adjustment Team. Though the adaptation is a loose one – the original story was not a love story – the premise is the same…are we in charge of our lives, or are decisions made for us long before we consider them.

Matt Damon plays charismatic politician David Norris who, on the brink of winning a seat in the US Senate, is ruined by revelation of a drunken escapade when he was younger. While preparing his speech he meets beautiful contemporary dancer Elise Sellas (Emily Blunt), and after a short time together they begin to realise there is something special about each other.

It seems that the men from the Adjustment Bureau – gents in 1950s style dark suits and hats – are on a mission to keep them apart. Apparently their long-term fates are written in a ‘plan’, with the Bureau planning for David to enter politics again and eventually reach the White House and for Elise to become America’s greatest modern dancer.

But a glitch in the plans – when Harry (Athony Mackie), the sympathetic Bureau man assigned to David’s case, accidentally dozes off – means that some time later David bumps into Elise again. The full force of the Bureau is marshaled and David is briefed about these men can do (David describes them as ‘angels’ and they little to dissuade him of this notion) and told he cannot see Elise again.

While he appears to agree, he secretly spends the next three years travelling the same route on the bus in the hope he will bump into her again, and then one day miraculously sees there on the street.

Adamant that he wants her more than the planned life the Bureau has set down for him, David must do anything he can to bring the two of them together. In the face of overwhelming odds he must defy the fates and convince her of the unbelievable truth of the Adjustment Bureau.

The Adjustment Bureau is never played as a thriller – though there are moments of thrills – but rather as a sophisticated romantic adventure with a side order of fantasy. It is suave and sleek, and the fact that the men from the Bureau look like they have teleported in from the set of Mad Men (which makes the casting of Mad Men star John Slattery so appropriate) gives it a polished edge lacking in many modern attempts at the romantic thriller. In fact Cary Grant at his North By Northwest best would have been perfect acting in the David Norris role.

The special effects amount to scenes of the Bureau men being able to open doors – just seemingly ordinary doors – which act as portals between various spots in New York. In one scene they seem to be able to freeze humanity, but this is never replayed and the film relies on the passing from door to door as its fantasy gimmick to flit around the city.

The only real gadgets on show are the hats. The Bureau men must wear one of their hats in order to access the portal doors. They men also often seem to work with rather inept enforcers – but (rather like the security men in Woody Allen’s Sleeper) these men simply wear black jackets, dark helmets and visors and simply run around threateningly rather than actually doing any damage.

In fact there is never any real sense of peril. Yes, Matt Damon runs around a lot trying to reach Elise and then get them to escape from the Bureau men, but even the ominous pronouncements of tough-guy Bureau man Mr. Thompson (Terence Stamp in excellent form) feels rather half-hearted set against the film’s engaging notion of true love winning out against all odds and against the fates.