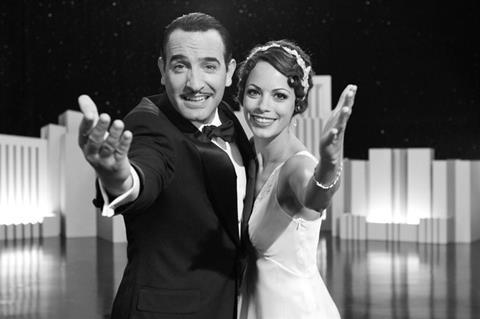 Possibly one of the most joyously enjoyable films to screen in the Cannes competition - especially for lovers of classic Hollywood cinema - The Artist is a real pleasure… shot in beautiful black-and-white, silent (apart from a few brief moments of sound) and propelled elegantly forward by delightful performances from Jean Dujardin and Berenice Bejo it is the most unlikely of feel-good movies.

It is true the film is a pastiche…but it is lovingly made and extremely watchable all the same.

The Weinstein Company picked up for film for the US at the start of the festival and it could well prove a popular draw for other distributors with a love for old-time Hollywood fare. Though French produced - and the two leads also French - the remainder of the key cast are recognisable US actors and the film’s intertitles are all in English. It will be a challenge to market, but strong critical response should aid releases.

Writer/director Michel Hazanavicius has scored notable successes with his two OSS:117 spy spoof films - both of which starred Jean Dujardin, and with Berenice Bejo also starring in the first film - and has embraced the technical challenges of The Artist, constructing an appropriately old-fashioned story packed with plenty of nods to Hollywood classics and bringing out the best of his talented cast. It is true the film is a pastiche…but it is lovingly made and extremely watchable all the same.

And in Jean Dujardin he has the perfect leading-man. He is a gifted physical performer and the grace, style and easy charm that worked so well as the blundering spy in the OSS:117 films is harnessed perfectly as successful silent movie star George Valentin whose career is blighted by the arrival of the talkies.

Valentin is at the height of is powers in 1927 when he meets the vivacious and warm-hearted Peppy Miller (Bejo), who is trying to break into the movies through work as an extra. In a plot similar to A Star Is Born and Singin’ In The Rain, as Peppy Miller’s star is in the ascendance as the studios looks for new fresh new talent with nice voices, so George’s career dips. The Wall Street crash arrives only to seal his fall from popularity as he invests all of his money in an overblown silent African adventure film Tears Of Love.

The film does feel a little sluggish towards the end of the first third as the music is a little repetitive and the intertitles are infrequent, but Hazanavicius manages to give the film a real sense of charm and warmth, and film fans will be competing to spot visual and musical references. The films of silent Murnau, Chaplin and Borzage are obvious visual influences, while Welles’ breakfast scene in Citizen Kane is delightfully referenced as George and his sullen wife (Miller) unhappily trudge through their marriage.

The relationship between George and Peppy is nicely handled. Dujardin has a ball playing a variation of Douglas Fairbanks while Peppy’s grace and innocently passionate personality (perfectly played by Bejo) is the perfect balance to George’s sophistication and charm. Both are also terrific dancers, as they get to display in a climactic scene.

Sound does briefly - and engagingly - dip into the film. In an amusing dream (or nightmare for him) scene, George imagines the sudden appearance of sound in the studio as suddenly he can hear voices and winces as even a feather falls to the floor. In the very final scene there is the briefest moment of dialogue.

The American supporting cast are also impressive. John Goodman has real presence as the flustered studio executive, while James Cromwell is suitably stoical as George’s loyal driver. Missi Pyle has a nicely judged cameo as a blonde silent star unable to make the transition to talkies - in a role rather similar to Jean Hagen’s as Lina Lomont in Singin’ In The Rain.

The film, though, comes close to being stolen by the wonderful canine antics of George’s loyal Jack Russell companion Jack (real name Uggy). Production design, costumes and music cues are all sheer perfection.