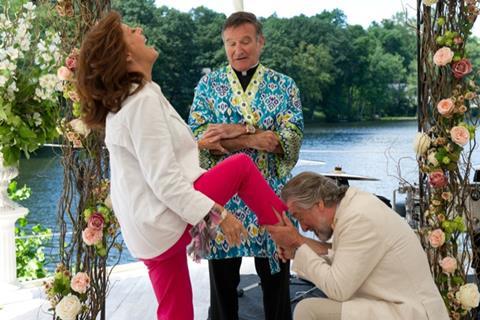 Though nothing like as uproarious as it wants to be, The Big Wedding gets some fairly amusing (and relatively raunchy) comedy as well as some mildly affecting drama out of its familiar dysfunctional-family-gathering scenario. And it does so with the help of a strong dual-generational cast - led by Robert De Niro, Katherine Heigl and Diane Keaton - that should help this Americanisation of 2006 French-Swiss release Mon frère se marie connect with the increasingly active baby boomer audience.

De Niro, Keaton and Sarandon make an enjoyable love triangle even without much help from a script whose banter is never quite sharp enough.

Reaching beyond that core female-skewed audience will be the real challenge when Lionsgate opens the Millennium Films production wide in the US (with an R rating) this weekend and when the film rolls out internationally through independent distributors during the early summer months.

Writer-director Justin Zackham (best known for scripting boomer hit The Bucket List) sets his adaptation in the pretty Connecticut home where sculptor Don Griffin (De Niro) is hosting the wedding of his adopted son Alejandro (played by the UK’s Ben Barnes, from the Chronicles of Narnia films) to Missy (Les Miserables’ Amanda Seyfried).

But it’s the cast that really carries the film. De Niro, Keaton and Sarandon make an enjoyable love triangle even without much help from a script whose banter is never quite sharp enough. The raunch extends to a handful of four letter words and some glimpses of a lively sex life.