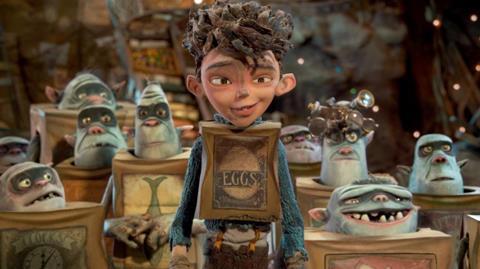 An engagingly dark animated romp, The Boxtrolls is very much in the tradition of home studio Laika’s stop-motion hits Coraline and ParaNorman, but somehow lacks the humour, gothic thrills or left-field charm of its predecessors. Sure there are a few moments of oddball humour and the 3D looks good when it comes to the Boxtrolls underground lair, but it all feels rather simple and lacking in the real cleverness audiences come to expect from such fare.

Snatcher makes for an effective villain (especially when decked out as his red-haired cross-dressing alter ego Madame Frou Frou) and his antics keep the film intriguing.

Loosely adapted from Alan Snow’s Here Be Monsters series of books, the film features the same ‘yuck’ factor of ParaNorman (trolls eating bugs, a bad guy’s body deforming etc) which equally makes it perhaps unappealing for younger viewers, and while there are a few smart gags the boxtrolls themselves are not overly charming and the two young character leads offer little in the way of personality. It may appeal to tens and older, but may be a challenge to snag big box office.

The film is set in the towering city of Cheesebridge, where boxtrolls roam at night (they are green mumbling little creatures who wear cardboard boxes like crabs) stealing odd bits of rubbish. Things go badly for them when they are accused of stealing a baby, and they find themselves chased by Archibald Snatcher (voiced by Ben Kingsley, but looking like a fuller version of the Child Catcher from Chitty Chitty Bang Bang) and his three lackeys (who turn out the cleverest and funniest characters in the whole film).

Snatcher wants to join the ‘white hats’ who control the town and spend their evenings tasting different sorts of cheese… all this despite he is allergic to cheese. Head white hat is Lord Portley-Rind (Jared Harris) who promises the hat to Snatcher when he is convinced the trolls may be after his cheese.

That afore-mentioned baby grows up to join the trolls in their nighttime expeditions (now called ‘Eggs’ because he wears an egg box that he has used since he was a baby and is now too small on him) and manages find out the truth behind where he came from after many of the trolls are captured by Snatcher. Eggs (voiced by Games Of Thrones star Isaac Hempstead Wright) joins forces with Portley-Rind’s feisty daughter Winnifred (Elle Fanning) to try and save the trolls, only to be faced by Snatcher’s impressive fire-belching steampunk machine that causes havoc in the underground troll community and in Cheesebridge.

Snatcher makes for an effective villain (especially when decked out as his red-haired cross-dressing alter ego Madame Frou Frou) and his antics keep the film intriguing, but the boxtrolls themselves are never overly charming and neither is the grungy subterranean world they live in. Best of all are Snatcher’s thoughtful sidekicks Mr Trout and Mr Pickles (voiced respectively by Nick Frost and Richard Ayoade), especially their amusing realisation that they are evil henchmen and not do-gooders as they had long assumed.

Screenplay: Irena Brignull, Adam Pava, based on the book Here Be Monsters by Alan Snow