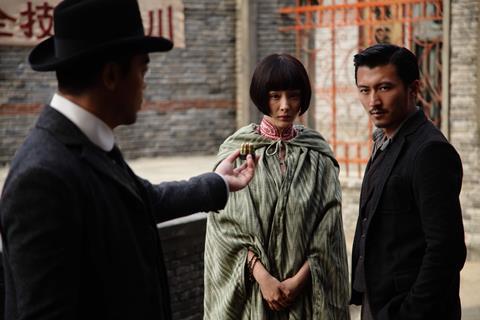 Less fantasy-oriented than Tsui Hark’s supernatural Detective Dee and more seriously minded than Guy Ritchie’s playful Sherlock Holmes movies, The Bullet Vanishes is a competently staged period whodunit which, judging from its handsome box office returns in mainland China and its makers’ visual flair and intellectual candour in handling the complicated material, has ample potential to develop into a prominent detective movie series for the Chinese-speaking market.

A sumptuously realised detective mystery that merges Holmesian deductions with shootouts, explosions and action sequences – some of which are shown with slow-motion bravado.

Set in Tiancheng Province, China, this stylish 1920s-set movie opens to the suspicious death of a young female worker of an ammunition factory, who’s forced by the crooked owner (Liu Kai-chi) into what turns out to be a rigged game of Russian Roulette. The mystery only deepens as a murder subsequently takes place at the factory – with a bullet that seems to have spontaneously vanished from the scene – and rumours begin to circulate that the dead girl has put a curse on the factory, predicting further deaths by ‘phantom bullets’.

A veteran of horror flicks and action thrillers (Double Tap, Inner Senses, Koma, Kidnap), director and co-scriptwriter Lo Chi-leung comes up with arguably his best film to date with this Hong Kong-China co-production, a sumptuously realised detective mystery that merges Holmesian deductions with shootouts, explosions and action sequences – some of which are shown with slow-motion bravado.

Lo is handsomely assisted by his lead pairing, Lau Ching-wan and Nicholas Tse. The former plays Song Donglu, an eccentric forensic expert whose unrelenting pursuit of justice has earned him a promotion as the new NPA officer at Tiancheng’s corrupt police headquarter, while the latter plays Guo Zhui, a righteous cop who arrives with a history as a contract killer and a cheesy reputation as the “fastest gun” in town.

The Bullet Vanishes is, however, not a buddy movie in its core. Guo, despite his skills with firearms (he can hit his targets with bullets that bounce off walls, as if he’s playing pool), is less a right-hand man for Song than he’s a rival investigator of the cases. Judging by Hollywood standards, it could be said that the two leading men have been given relatively few occasions to banter and bond; their interactions are sometimes amusingly, if not quite intentionally, awkward.

But that, together with a relative lack of humour, doesn’t diminish the entertainment quotient of the film, which maintains its sense of intrigue with an incessant stream of details and clues. Here is a detective mystery that trusts its audience to put the puzzles together, without succumbing to the tendency of mainstream blockbusters to explain everything away for their viewers’ easy, immediate consumption.

The rapidly increasing number of henchmen and factory workers involved – or killed off – in the mysterious circumstances may be fairly overwhelming for the less attentive viewers. Amid the vanishing bullets and a case of locked-room murder, extraneous developments are few and far between in the movie; even Guo’s romantic interest, a tricky fortune-teller called Little Lark (Mimi Yang), would prove to be playing a vital yet barely discernible role in the chain of causation.

The one major weakness of this otherwise very satisfying movie is its lack of a sense of humanity. Despite Lau’s charismatic presence, it’s hard for the audiences to identity emotionally with a protagonist they know nearly nothing about. The back story of Song is curiously kept private and, one would reasonably guess, for the next instalment of the would-be series.

In all likelihood, the protagonist’s relationship with an incarcerated husband killer (Jiang Yiyan) – whose own intricate murder plot is briefly reconstructed for Song in The Bullet Vanishes (shot with an inventive dash of silent film aesthetics) but whose past history with the detective is left perplexingly unspoken – should return in a more expositional manner in the probable sequel.