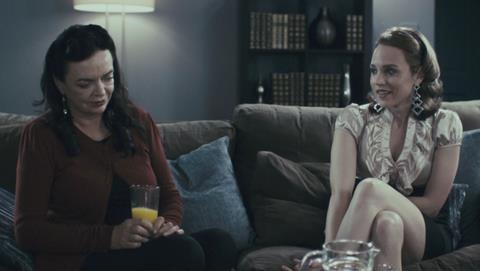 This psycho-horror film is constructed around the magisterial presence of British-born actress Barbara Steele, who emerged as a major presence in horror in the early 1960s with roles for Mario Bava in Italy (La Maschera del demonio, aka Mask Of Satan, aka Black Sunday) and Roger Corman in Hollywood (Pit And The Pendulum), though she also appeared in Fellini’s 8 1/2.

The Butterfly Room is about smothering motherhood and the instinct to control and preserve offspring.

Latterly active as a producer (the Winds Of War TV miniseries), Steel here has the sort of star turn venerable genre icons like Boris Karloff and Vincent Price often found in their golden years.  Ann, the mad mother Steele plays, feels like the sort of ageing female maniac popular in the wake of What Ever Happened To Baby Jane? and often found in the films of Curtis Harrington in the 1970s - and gives Steele more to chew on than her last psychopath casting, in the 1978 slasher film Silent Scream.

Set in Los Angeles, The Butterfly Room is about smothering motherhood and the instinct to control and preserve offspring.  Ann, a stylish oldster, is estranged from her own daughter (Heather Langenkamp, erstwhile teen star of A Nightmare On Elm St), whom she rejected at menarche, and lives in a well-appointed apartment with her butterfly collection and a secret concealed behind the wall.

Ann takes an interest in Julie (Ellery Strayhorn), neglected daughter of an irresponsible neighbour (Erica Leehrsen, from the Texas Chainsaw Massacre remake).  The little girl becomes intrigued by what goes on in the eponymous room, which is dimly-lit so as not to fade the butterflies’ wings.  In an overly complex structure, flashbacks detail Ann’s previous interest in Alice (Julia Putnam), another precocious little daughter substitute.

The devious Alice who has worked out a scam for extorting money from a succession of older, maternal protectors in order to augment the income her one-legged mother (Elea Breitling) makes as a specialist call girl.  Ann is willing to kill to conceal what happened to Alice - which is slightly too guessable - and racks up a body count in order to keep various people from interfering with her obsessions and to allow for regular dollops of inelegant gore.

Steele, still a formidable presence, isn’t quite the whole show here – she has barbed encounters with other genre veterans in mostly sinister roles, Ray Wise (Twin Peaks) as a builder, Camille Keaton (I Spit On Your Grave) and Adrienne King (Friday The 13th) as competing surrogate mothers, P.J. Soles (Halloween) as a bystander, even James Karen (Return Of The Living Dead) as a salesman and director Joe Dante as a cab driver.

This in-joke casting takes the film into areas of camp which undercut its horror element, though Langenkamp - little-seen since her interesting turn in Wes Craven’s New Nightmare - is outstanding as the real daughter of the world’s worst mother, desperate to keep Ann away from her own child.  Perhaps the best work in the film comes from young Julia Putnam, in creepy yet perfect-seeming child mode, which slightly unbalances the grand guignol.

Alice - a mercenary schoolgirl who has seemingly invented a non-sexual form of prostitution by renting herself out as a living dress-up doll for middle-aged matrons - is a more unusual character than the fairly standard menace she is pitted against though the final revelation shows that she has not come off best in their confrontation.