The Colour Of The Mountains (Los Colores De La Montana) 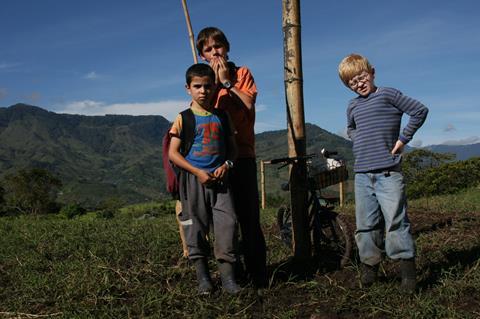 Carlos Cesar Arbelaez’s debut drama feature is a moving, funny, poignant and insightful look at ordinary lives of farmers and workers toiling away in a remote region of the Andes, caught between the guerilla fighters and government troops, all seen through the eyes of a soccer-obsessed nine year-old boy.

Though politics are at the core of the film, Carlos Cesar Arbelaez does not try to detail the situation in Columbia or take specific sides.

It is a powerful debut that rightly received strong applause at its world premiere at the San Sebastian Film Festival, and is just the sort of film that should interest art house buyers as well as other festival programmers. The influences of Iranian cinema as well as Louis Malle and Francois Truffaut are there on the screen, and while the underlying topic is tough, it is a film for all age groups.

Against the stunning backdrop of the modern day La Pradera region, part of the remote mountainous Columbian countyside, young Manuel (Hernan Ocampo) and his young friends are simply desperate to play football, using cobbled together goals on a small bit of flat land.

Their hard-working parents farm cattle and other crops, with Manuel’s father avoiding contact with the guerillas who want him to be part of their organisation while also keeping out of the way of the heavily armed military who scour the mountains for the rebel fighters.

The footballing plans of Manuel – and his best friends Julian (Nolberto Sanchez) and the poorly-sighted albino Poca Luz (Genaro Aristizabal) – are hampered by the arrival of a new teacher, the last one having been chased away by the guerillas. She insists Manuel focus on his maths rather than his favourite subject – drawing detailed and brightly coloured pictures of the mountains.

Manuel is given a new football for his birthday, but while playing one of the boys kicks it into nearby grassland. They are about to get the ball when a boar wrangled by a local farmer runs towards the ball, only to be blown up by a mine.

As things get more tense in the community, with families packing up and leaving and the army capturing and killing those they suspect help the guerillas, all Manuel and his friends are interested in is trying to find a way to get the football back.

The story is seen through the eyes of the willful and charming Manuel, who is aware of the dangers around him, but whose only real focus is drawing and soccer. The guerillas and military are tangential to his life – and the film – initially, but as they grow closer and closer to him and his family, so the film’s colour tones grow darker and darker.

The scenes of Manuel, Julian and Poca Luz trying to find ways to get the ball back from the minefield – from trying to flick it with stick to dangling Poca Luz at the end of rope – are funny yet tinged with danger, while in the film’s most moving section the teacher gets the children to paint over the rebel graffiti on the back wall of the school and paint their own bright mural with a child’s view of the region – lovely mountains, bright cars, happy farmers and cute animals.

Though politics are at the core of the film, Carlos Cesar Arbelaez does not try to detail the situation in Columbia or take specific sides, rather he simply presents a harrowing situation through the simple and optimistic eyes of a young boy.