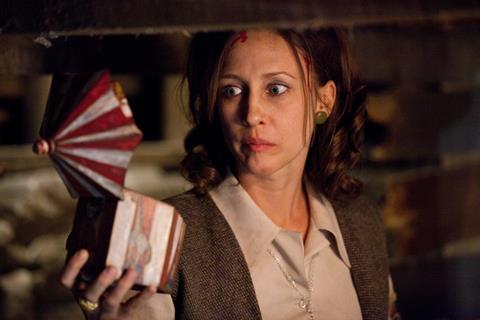 Rattling the nerves while drawing out its palpable sense of dread, The Conjuring is a proudly old-fashioned horror movie that tells its story with sophistication and care. Though some of its ingredients are familiar — creepy dolls, haunted houses, deeply upsetting exorcisms — director James Wan’s film displays such intelligence (which extends to the realistic, understated performances) that its terrors transcend the conventional framework.

With its clear echoes of The Exorcist, The Conjuring aims to be a classier, more reserved breed of fright film, showing almost no blood and resorting to few overtly gotcha scares.

After its North American premiere at the Los Angeles Film Festival, The Conjuring will be released in the US on July 19, with distributor Warner Bros. no doubt hoping that Wan’s track record as the director of Insidious and the original Saw will be able to lure genre fans. In addition, the movie could be helped by that fact that it’s based on an actual case file from paranormal experts Ed and Lorraine Warren, who were also the team behind the investigation that inspired The Amityville Horror.

Set in 1971, the film follows Ed (Patrick Wilson) and Lorraine (Vera Farmiga) as they look into strange happenings at a farmhouse recently purchased by married couple Roger (Ron Livingston) and Carolyn Perron (Lili Taylor). Fearing for their and their five children’s safety, Roger and Carolyn are convinced that some sort of evil spirit has invaded the home, and sure enough the Warrens become convinced that a demon is wandering the halls, although its objective isn’t immediately clear.

In their place, Wan and his frequent cinematographer John R. Leonetti focus on an atmosphere of constant anxiety, utilising slow, fluid camera movements to hint at horrors that could be lurking just out of view. Likewise, composer Joseph Bishara has fashioned an elegant, restrained score that rarely oversells the shocks, preferring a quietly insistent mood of slithering unease to produce its desired effects.

Screenwriters Chad Hayes and Carey W. Hayes do laudable work to establish these characters as more than just anonymous victims, specifically forging a bond between the two married couples so that the Warrens see in the Perrons a decent, fragile family that’s not so different from their own. And even the movie’s more potentially hackneyed elements — Lorraine, as a psychic, can see ghosts and other supernatural figures — are rendered with a no-nonsense simplicity that makes them feel plausible.

Of course, the performances go a long way toward creating that sense of believability, and Wan has done a fine job casting his film with actors that might not necessarily be obvious choices.

Wilson, who was also in Insidious, has an easy rapport with Farmiga, suggesting a couple that has seen their share of terrors, which has affected them but hasn’t shaken their business-like approach to the paranormal. Livingston, who appeared in the cable miniseries Band Of Brothers, is still probably best known for his comedic roles in Office Space and Swingers, and yet he’s effortlessly sympathetic and compelling as the worried father powerless to protect his family from this growing threat inside their new home. And veteran character actor Lili Taylor has one of her best roles in years, playing a mother whose mysterious newfound bruises portend a dark fate.

In the process of fashioning a horror movie that’s a throwback to an earlier era, the filmmakers have thankfully avoided much of the trendy contemporary genre tropes. (For instance, the explanation of what precisely is going on inside the house isn’t handled in a needlessly complicated way. And The Conjuring actually offers a reasonable excuse for why the characters don’t just abandon their seemingly cursed house.) But as wonderfully efficient as the film is in scaring the viewer, the script doesn’t offer a lot of surprises, its terrors relegated to a rather narrow band of familiar setups.

With that said, however, such quibbles may seem very minor after experiencing The Conjuring’s third act, which is incredibly intense. Wan’s finale may recall dozens of previous horror movies’, but the skill of his staging and the commitment of the performances are such that the film very confidently puts you through one hell of a wringer.