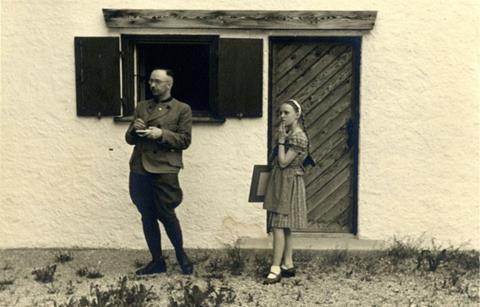 The private recollections, documents, journals and photographs of one of the most brutal mass murderers in world history make for perversely compulsive viewing in Vanessa Lapa’s engrossing documentary about SS commander Heinrich Himmler. Quite how he made the journey from an ordinary middle-class man to Hitler’s henchman is a fascinating story and if his transition is brutal architect of the holocaust were not enough what shines through even more disturbingly is his sheer lack of any sense of guilt.

The assembly of footage – weaving Himmler’s archival material with wartime footage – and the voiceovers make for gripping viewing.

The Decent One (Der Anstadndige), which screened at the Berlin Film Festival, is made up of Himmler’s archive material found at his family home in Gmund on Lake Tegernsee by soldiers of the 88th US Infantry Division who occupied the building in May 1945. It traces his life from a nationalistic outsider to loyal Hitler supporter to the man who developed the strategies that led to the murder of millions of Jews, homosexuals, Communists and Romany people.

As a biographical sketch of such a complex individual (who eventually committed suicide in 1945 by taking a cyanide capsule), the film is darkly gripping. His origins seem ordinary, though he had an early lust for war and was frustrated not to be able to join up during World War I, and the flames of his nationalistic leanings were fanned in the post-War years, especially when he had his first encounter with Hitler’s Mein Kampf.

He appeared to be a cold but caring husband and father, romancing his wife Margarete through love letters; caring for his daughter Gudrun, and tender towards his mistress Hedwig (with whom he has two children). He even sends Christmas gifts to his family as he visits extermination camps at Treblinka, Sobibor and Auschwitz, balancing his twin personas of caring (though clearly dysfunctional) family man and systematic murderer.

The assembly of footage – weaving Himmler’s archival material with wartime footage – and the voiceovers make for gripping viewing, and while the audiences is asked to read between the lines to unearth the darkness of Himmler’s real personality in amidst the mundanity of some of the correspondence there are also moments of real power.