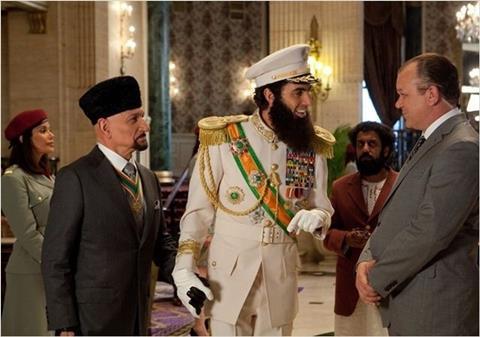 Sacha Baron Cohen abandons the hidden-camera stunt comedy of Borat and Bruno for a more conventional fish-out-of-water laugher in The Dictator, and the results are consistently amusing, if never quite shocking or hilarious. Portraying the bigoted, misogynistic, moronic dictator of a fictional North African country, Baron Cohen doesn’t draw blood with his barbs, and fans of his earlier work may well be disappointed by the lack of high-wire spontaneity that used to power his humour. Thankfully, the star provides such an amiable centre to this hit-or-miss comedy that you forgive the dull passages even while you wonder if he might need to seek out a new shtick soon.

Just like with Borat and Bruno, Baron Cohen is playing a foreigner who represents a form of “The Other” that repels most Americans.

Opening May 16, The Dictator may end up becoming a referendum on Baron Cohen’s box office vitality. 2006’s Borat was a surprise smash, although 2009’s Bruno proved to be far less of a theatrical sensation. But despite appearing in last year’s Oscar-winning Hugo, the Baron Cohen on display in The Dictator is very much the one audiences remember from his two previous star outings, although this time around he’s not playing a character that was already well-known from his old TV show, Da Ali G Show. A lacklustre (albeit aggressive) advertising campaign and a crowded marketplace may conspire to limit the commercial power of this Dictator.

Directed by Larry Charles, who previously helmed Borat and Bruno, The Dictator is, for once, a Baron Cohen film that’s a straight narrative rather than a mockumentary. Admiral General Aladeen (Baron Cohen) rules oil-rich Wadiya with an iron fist and a thick skull, much to the annoyance of his second in command, Tamir (Ben Kingsley). But during a trip to New York to speak to the U.N., Aladeen is the victim of a coup by Tamir and replaced with a double, finding himself forced to live like a commoner. But a pretty lefty (Anna Faris) soon befriends him, not realising he’s a murderous tyrant.

Borat (and, to a lesser extent, Bruno) got their humour from the fireworks that arose from Baron Cohen’s characters’ interactions with unsuspecting regular people. Along the way, Baron Cohen managed to make insightful points about cultural intolerance, an impressive feat considering the sometimes-crass gags that were also on display. By comparison, The Dictator (though rated R like his two earlier films) is noticeably sweeter and milder.

To be fair, Baron Cohen’s characters, despite their coarse surface, tend to be kind-hearted rubes rather than truly evil, but nonetheless this new film lacks the killer instinct for attacking sacred cows or upending political correctness. For all its occasional sexual humour and off-colour jokes, The Dictator is mostly just a cultural-clash comedy without much in the way of political or thematic undercurrents. (To be honest, the film’s basic outline resembles the 2008 Adam Sandler film You Don’t Mess With The Zohan, except for the fact that the Sandler character was Israeli.)

The Dictator’s general mildness is hardly a fatal flaw, though, as Baron Cohen gets plenty of mileage out of Aladeen’s brazen ignorance. Adopting a vaguely Middle Eastern accent and a pompous gait, Baron Cohen plays him not as a fearsome monster but, rather, a spoiled child sheltered from the realities of the world. Consequently, that doesn’t give Aladeen much room to develop as a character – a lot of the jokes stem from his confusion over American customs – but by this point Baron Cohen has demonstrated his bona fides as a funny chronicler of the blissfully stupid.

But that also hints at The Dictator’s nagging limitation, which is its familiarity. Just like with Borat and Bruno, Baron Cohen is playing a foreigner who represents a form of “The Other” that repels most Americans. But this once-inspired routine has lost most of its electricity, rendering The Dictator something of a sequel to – rather than a refinement of – his earlier work.

But as with Borat, Baron Cohen is helped immensely by a sidekick he can play off of. In The Dictator, that’s Jason Mantzoukas, who plays a nuclear scientist who Aladeen had ordered assassinated but instead was deported to New York. Now teaming up in the US, the two men have a lively banter, allowing the two actors to riff off one another sharply without lapsing into self-satisfied improvisation.

This duo’s rapport proves crucial since The Dictator’s plot, involving Aladeen’s attempts to wrest power back from Tamir, leaves much to be desired. Additionally, the romantic pairing between Baron Cohen and Faris mostly just marks time. (Although Faris is known for her bubbly, goofball turns in The House Bunny and the Scary Movie films, she’s disappointingly dialled-down here.) And while it’s fun to see Kingsley do comedy for once, his straight-faced portrayal of Aladeen’s right-hand man isn’t given enough great moments to really shine.