Screen talks to co-writer Evan Morgan and cinematographer Jared Raab about high school drama The Dirties, recently picked up by Phase 4 in the US. 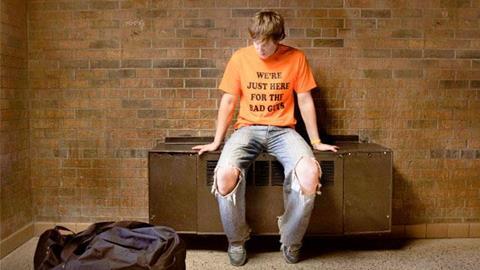 Set to be one of the most talked-about films of the festival, The Dirties plays like a high school comedy shot in a faux-documentary style before taking a shocking and compelling turn in its third act. The film will be released on Oct 4 domestically via Phase 4 and on VOD through Kevin Smith’s Movie Club.

Co-producers Evan Morgan and Jared Raab (also co-writer and cinematographer, respectively) sat down with Screen in Montreal, and explained the unique shooting style of the film. “It really came out of our webshow, Nirvana The Band The Show,” says Raab.

“We realised really quickly that we were developing this style of shooting really cheaply and quickly, and being able to do a style of drama that is informed by the documentary but not in the classic mockumentary form with interviews and talking heads.”

That style involved the use of a central cast of just four actors, expanding to eight others for the film’s more elaborate sequences. “When it was just the four of us, there’d be no dialogue and we’d just riff while the cameras were rolling,” notes Morgan, with Raab adding that only the last line in the film was scripted.

While giving the film an undeniably unique feel and pulling the audience into the action more than your standard ‘found-footage’ style, it wasn’t without its complications. “When it came time to involve the actors we’d hired, in order to keep it fresh and surprising, we gave each of them a different script, forgetting that they would all be waiting for specific cues that weren’t coming,” recalls Morgan.

Shooting with real people also led to unexpected legal-related issues. Raab mentions the issues with the opening scene of the film, where our two protagonists meet two children in the park who also happen to be shooting a film.

It’s a lovely scene to open with, setting out both the tone and style of the film, but the filmmakers forgot at the time to get clearance to use the children resulting in them having to track them down by going to every school in the area.

It’s an anecdote with a happy ending though. “They were really cool. [In the film] they explain the movie they’re making called The Visitor and we’re putting it on the DVD,” adds Raab.

In addition, there were very few people that knew what the film was actually about, even if some knew they were a specific character. It allowed them to capture the “nuanced reality” according to Raab.

“It’s one of those things that if anyone was self-aware how weighty the storyline was, we couldn’t have captured some of the light-hearted, youthful exuberance that people have. The moment they became self-aware, you don’t have that high school authenticity.”

With the film making an impact on the festival circuit - winning at Slamdance for one - and with a release date set, it’s impossible to ignore the potential controversy.

“We knew there’d be inevitable controversy from the subject matter but it was not something we were interested in at the time we were making it. We were dealing with the subject in dramatic terms and didn’t think in broader social terms until the editing,” says Morgan.

Raab expands: “Matt [Johnson] has an unbelievable confidence that if you treat the subject matter intelligently, there is no real off-limits subject and there shouldn’t be as long as you’re being tasteful in the way you’re approaching it.”

So would the duo consider shooting in this way again? “It’s put me off,” jokes Morgan. “When we finally started watching the footage, I thought there were so many amazing, spontaneous moments and I got really excited. Then it was maybe after four months of editing that I thought I’d never do this again.”

As for Raab, he expects himself, Johnson and the film’s other producer Matthew Miller to continue in this style. “It’s a really unexplored style. There are very few people trying to develop the language to actually work out the tools that contribute to filmmaking that other styles can’t do.

“Something that’s inherent in documentaries is having the director somehow involved in the story and that’s something that people are not exploiting enough. You can send the audience into such strange headspaces and The Dirties just scratches that surface.”