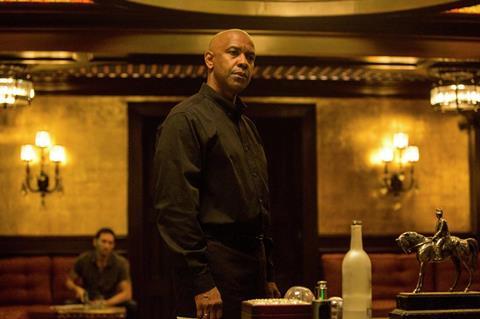 If there is anyone out there you might want to hep you out when you are in a pickle with Russian mobsters, it might be Denzel Washington’s everyman hero with a secret and rather violent past. Antoine Fuqua’s violent updating of the popular 1980s television series that starred Edward Woodward as a skilled former government agent turned saviour of oppressed ordinary folk is a smart bit of 1970s style revenge action drama – sort of Taken crossed with Death Wish – that may be short on humour but more than makes up with liberal bloodshed.

What gives the film its edge is Denzel Washington’s sheer charisma as he brings something extra special to a man who says little, walks softly and has a great capacity for violence.

It is all rather leisurely paced – which makes a change from similar action fare – as Fuqua takes his time to develop Washington’s seemingly genial but stoical character, but when things get moving in the last third he delivers action a-plenty, even setting up the film for a possible sequel and/or franchise. The film later this month after its Toronto premiere and should strike a chord with adult audiences keen for a little sophisticated mayhem.

Boston-based Robert McCall (Washington) takes the bus to work – rather than the Jag Woodward used in the TV series – clocking up hours as a behind-the-scenes worker at a large Home Depot-style store. A widower, he is also an insomniac and often ends up spending nights drinking tea and reading in a local diner. Here he has a friendly exchange with young Russian hooker Teri (Chloe Grace Moretz), but when she is beaten up by her brutal pimp McCall is pushed to the edge and decides to take matters into his own hands.

The film is a slow-burn initially as Fuque set s up McCall as a kind, solitary, man who gets on well with co-workers and looks out for young hookers, but when he decides to get medieval on the pimp and his henchmen (using corkscrews, a knife, a glass and a gun, just to keep things varied) he does so speedily and efficiently. He is a man with a background and a skill set, and once in motion he likes to end things speedily.

The Russian bosses send in brutal reinforcement in the form of enforcer Teddy (Marton Csokas) who is there to find out who is messing with the operation, and as the body count starts to rise so the film reveals more about McCall’s abilities (even taking time out for him to visit former ‘Agency’ colleagues played by Bill Pullman and Melissa Leo on their large country estate). But the more bad guys McCall kills, the more rather inept black-dressed villains arrive, with the film finally heading for a rather expected showdown at the store when McCall can make good use of the available tools (yes, drills and nail guns do come into play).

What gives the film its edge is Denzel Washington’s sheer charisma as he brings something extra special to a man who says little, walks softly and has a great capacity for violence. It isn’t an overly flashy role and he barely smiles, but there is something classy about this man who turns to the skills of his past life when faced with trying to help out ordinary people. Fuque shoot with style and precision, though some of the fight scenes are a little blurred, but in the end the Washington factor wins through.

Screenplay, Richard Wenk, based on the television series created by Michael Sloan and Richard Lindheim