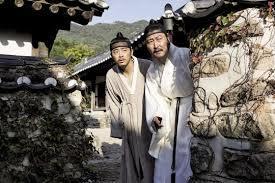 Signifying somewhat of an emphatic comeback for the South Korean director Han Jae-lim who last made a film in 2007 (The Show Must Go On), The Face Reader is a gloriously sumptuous period drama that illustrates Han’s strong craftsmanship at tackling a number of different genres following his frank romantic comedy Rules of Dating (2005) and the aforementioned crime drama The Show Must Go On, but it’s the film’s resounding domestic box office success that has attracted the most attention after amassing over $52.5 million (some 7.7 million admissions) since its release on September 11.

The film boasts a number of attributes in terms of its technical achievements; from the gorgeous cinematography by Go Rak-sun that beautifully captures the era’s majestic colours to the elegant production and costume design by Lee Ha-jun and Shim Hyun-seob.

Replicating the success of last year’s box office period piece Masquerade that clocked up over 12 million admissions ($82.6 million), the film’s wide-appeal has capitalized on the Korean thanksgiving holiday that took place from September 18-20 attracting over 2.3 million people generating a whopping $16.2 million in just 3 days.

The film will also head stateside as it hits screens in North America on October 4 on a limited theatrical run screening in 13 cities including New York and Los Angeles through Seoul-based Dreamwest Pictures, which also distributed Secretly Greatly in North America in July.

Set in the mid-1450s during the Joseon dynasty it follows a face reader called Nae-kyung (Song Kang-ho) who after being approached by an alluring courtesan called Yeon-hong (Kim Hye-soo) moves to Hanyang (an old name for Seoul) with his brother-in-law where his gifts as a physiognomist are soon made apparent.

Before long Nae-kyung aids a murder investigation and then is ordered by the king to determine who around him are conspiring against him. The King soon dies leaving the young successor Danjong to take the throne, but an ambitious Grand Prince called Soo-yang (Lee Jung-jae) seeks to rule the country. Nae-kyung, however, loyal to the late King along with the King’s advisor Kim Jong-seo (Baek Yoon-sik) attempt to protect the young King.

Much like Masquerade the film boasts a number of attributes in terms of its technical achievements; from the gorgeous cinematography by Go Rak-sun that beautifully captures the era’s majestic colours to the elegant production and costume design by Lee Ha-jun and Shim Hyun-seob.

While the film’s individual technical merits are all worthy of mention, it’s Han Jae-lim’s overall craftsmanship and his ability to combine these elements to lasting effect that really comes through.  In much the same way as Rules of Dating and The Show Must Go On, he leaves his own mark through his liberal vision of the genre as seen in the film’s dynamic direction of the casting as well as through the film’s visual aesthetic.

The choice and subsequent management of the cast is one of the film’s greatest assets reflecting a successful trend in Korean cinema as seen in The Thieves (2012) to use an ensemble cast that includes established names as well as younger ones to attract a wider and evolving demographic.

Song Kang-ho who also worked with Han on The Show Must Go On exhibits his wealth of class as the face reader as he slots so perfectly into the role solidifying his position as one of Korea’s most sought after actors following the success of Snowpiercer this summer that generated $62.1 million.

Lee Jung-jae meanwhile is on scintillating form as the tyrant trying to seize the throne not long after he compelled audiences in New World (2013) and The Thieves while Kim Hye-soo’s presence is as tangible as ever even though her character as the courtesan is rarely at the centre of attention.

Similarly, Baek Yoon-sik (2012’s The Taste of Money) along with the younger actors: Lee Jong-suk (As One) who plays Nae-kyung’s son and Cho Jeong-seok (Architecture 101) as Nae-kyung’s brother-in-law are suitably chosen and work to their strengths never giving the impression that they feel out of place or that their respective roles lack the sufficient character development.

The film does, however, suffer from an overlong duration and the storytelling could have benefited from further development to make it a little smoother, which would aid international viewers whom are largely unaware of the film’s cultural and historical connotations. Nevertheless, it’s largely a rewarding viewing experience for both local and international audiences and therefore should also attract attention when it’s shown to buyers at the Asian Film Market from October 7-10 that runs alongside the Busan International Film Festival that begins on October 3.