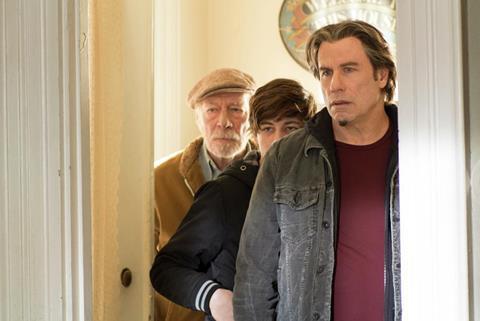 It is hard to resist declaring The Forger a poor imitation of a good film. Director Philip Martin’s pedestrian feature film debut is an unpersuasive mixture of clunky family tearjerker and lazy crime caper. Despite some fine work for British television, including Prime Suspect 7 and Birdsong, Martin is unable to transform Richard D’Ovidio’s uninspired screenplay into a viable theatrical attraction.

John Travolta tries on a succession of anguished expressions but never makes the supposedly decent Ray a charismatic figure as he becomes his son’s fairy godfather offering life lessons and art history lectures.

John Travolta’s low-key career profile in recent years and the fate of his most recent films (last year’s The Killing Season went straight to dvd in the UK for instance) suggests that he is equally unlikely to carry this to any substantial level of commercial success.

Travolta plays two-fisted art forger and master criminal Ray Cutter. Desperate to spend quality time with his teenage son Will (Tye Sheridan) (who has stage 4 cancer), Ray makes a fatal deal to engineer an early release from prison. As Ray renews acquaintance with his wary son, he is also obliged to paint a perfect replica of Monet’s Woman With A Parasol so that he can replace the genuine article on display at Boston’s Museum Of Fine Art and steal it to order.

There is very little to The Forger that rings true from the generic bad guys to some clumsily handled bouts of fisticuffs to confirm Ray’s tough guy status or the contrivances that have Ray offering his dying son three last wishes. Those wishes are to meet his long estranged junkie mother Kim (Jennifer Ehle), have sex, and join his father and grandfather Joseph (Christopher Plummer) in their daring heist. It appears that the family who robs together stays together.

Sadly, you just don’t buy any of this, especially as the plot expands to involve an undercover agent Paisley (an unconvincing Abigail Spencer) who seems only too ready to trust a convicted felon whose family business is crime and outwitting the authorities.

John Travolta tries on a succession of anguished expressions but never makes the supposedly decent Ray a charismatic figure as he becomes his son’s fairy godfather offering life lessons and art history lectures. It transpires that Ray’s dream is to live the good life in Tahiti like Gauguin. Tye Sheridan (Mud, Joe etc) fares much better as a stoical teenage son trying to make the most of the time left to him and gain a deeper sense of family affection.

Christopher Plummer is on rascally form as Ray’s vulgar, foul-mouthed Irish father but it is a very touching Jennifer Ehle who gives the film’s best performance, investing her all too brief scenes with an emotion and authenticity that seems sadly and strangely lacking in the rest of the film.