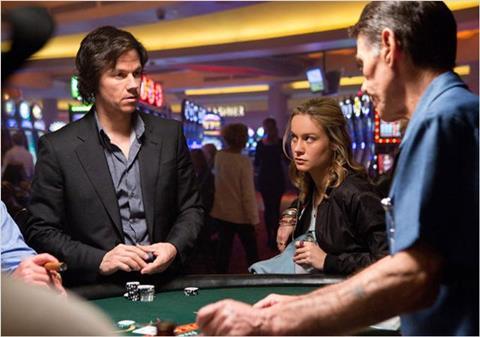 Tone trumps all in The Gambler, an exercise in studied cool that’s commendably idiosyncratic, although ultimately not to any great effect. Chronicling a week in the life of a gambling addict whose mounting debts may finally prove his undoing, this character drama is more a meditation on existential despair than a traditional crime thriller. To be sure, The Gambler follows its own rhythm, sometimes delightfully, but one can’t shake the feeling that producer and star Mark Wahlberg simply isn’t the right man to portray such a weary neo-noir figure, failing to plumb the depths necessary to give this meandering film its magnetic centre.

Even if not a lot happens in The Gambler, its low-key pace is refreshing, peculiar, almost subversive.

After its unveiling at AFI Fest, the Paramount release will be hitting US theatres in mid-December, when the film will be in a tricky position: It’s not quite a mainstream Hollywood offering and not exactly art-house fare, either. Wahlberg’s star power will help — he’s coming off two big hits in Transformers: Age Of Extinction and Lone Survivor — but The Gambler is too off-kilter to attract the masses. (In fact, don’t be surprised if reviewers compare it to divisive recent pseudo-thrillers such as The Counselor and Killing Them Softly, which were commercial nonstarters.) With neither award nominations nor feverish word-of-mouth likely, The Gambler will probably be only a modest theatrical performer, with most audiences catching up with it through ancillary markets.

Based on the 1974 film of the same name starring James Caan, The Gambler takes us into the unhappy existence of Jim Bennett (Wahlberg), a frustrated novelist who abandoned writing to become an English professor. His only real passion seems to be gambling, and even that wouldn’t be rightly described as a passion. Betting large amounts on blackjack, Jim doesn’t seem particularly concerned about winning or losing: He feels the rush of an addict, but there’s no enthusiasm or release. It’s almost a self-destructive urge as he refuses to walk away from the table until he loses all his money.

With debts of around $260,000, Jim knows he has to pay up or be killed by the owner of a local gambling ring (Alvin Ing). But even when given seven days to raise the funds, he’s oddly detached from the life-or-death stakes, spending as much time securing the money as he does getting to know one of his students, Amy (Brie Larson), a talented, beautiful writer who’s drawn to her enigmatic, fatalistic teacher.

The Gambler is directed by Rupert Wyatt, making quite a stylistic leap from his last effort, the sci-fi blockbuster Rise Of The Planet Of The Apes. (His new film is closer in spirit to his debut, the prison-break drama The Escapist.) Early on, The Gambler makes it clear that it wants to be an edgier genre offering, resisting most of the conventions of its milieu for an unpredictable, mournful tenor. This isn’t a movie about gambling addiction or, frankly, even gambling: Rather, it’s a contemplative study of failure. Born into great wealth and once destined for greatness, Jim has lately slid into complacency, bitterness and depression, berating his students and barely able to care whether he pays his debt on time. With little direction or much reason to keep going, Jim seems resigned to the fact that, one way or the other, death is coming soon for him.

In such a melancholic atmosphere, Wyatt emphasizes a neo-noir tone that values tough-guy talk and brooding inertia over plot twists. Consequently, Jim mostly hangs out from scene to scene, opening up to Amy or dealing with underground associates who are benevolent (John Goodman’s perfectly sardonic Frank) or malicious (Michael Kenneth Williams’s slithering Neville). There are no femme fatales or traditional villains in this film, but everyone we meet has a rough exterior, and William Monahan’s script plays up the characters’ hardboiled qualities, with conversations ranging from the philosophical to the satiric. Not unlike a meta-thriller such as The Counselor, The Gambler dresses up in genre clothes but then plays around, stretching the fabric until it rips.

There can be great pleasure in this approach: Even if not a lot happens in The Gambler, its low-key pace is refreshing, peculiar, almost subversive. But for the film to cash in, it needs a leading man with more presence than Wahlberg. It’s not that he hasn’t acquitted himself well in a range of dramas and thrillers from Three Kings to The Departed to Lone Survivor. But Jim’s angst is mostly internal — we’re meant to be enraptured by the mystery of his self-destruction — and Wahlberg can’t articulate the unknowable tendencies that have set him on this seemingly suicidal course. The easy charm and command he usually brings to a role are tamped down by Jim’s sullen, stoic pessimism. (Add to this the fact that Wahlberg provides no shading or insight into Jim’s dunderheaded refusal to stop gambling when he’s up. Obviously, the mind of an addict is rarely rational when it comes to his disease, but the actor is so withdrawn that Jim’s foolish stubbornness lacks much tragedy or pathos.)

Incorporating plenty of downtown Los Angeles, and shot dreamily by Greig Fraser, The Gambler is best enjoyed around the margins, where Goodman’s masterful (albeit brief) performance as a wise old criminal figure can be appreciated for the inspired lark that it is. (Frank enjoys talking in no-bullshit terms that are punchy and often hilarious.) But neither Larson’s understated likability nor a belated stab at a plot (involving a rigged sporting event) gains much traction amidst Wyatt’s determinedly dour vibe. The Gambler exudes weathered cool, to the detriment of too much else.

Screenplay: William Monahan, based upon the film written by James Toback