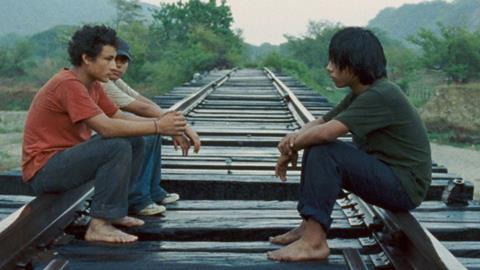 Shot chronologically in super-16, The Golden Cage (La Jaula de Oro) has an undeniable ring of truth as it tells the story of three impoverished teenagers from Guatemala as they make the fraught journey towards “El Norte” in an attempt to illegally cross the US-Mexican border.

Working best on the road - a coda takes The Golden Cage a step too far narratively – the director could probably have tightened up some of the earlier sequences, as the film has a tendency to drag.

This story has been related before – most recently, and similarly, in Cary Fukunaga’s taut Sin Nombre in 2009. The Golden Cage is a more restrained, quasi-documentary style of feature film, however, which demonstrates a great sense of humanity towards its subject matter.

Spanish-born director Diego Quemada-Diez has made some interesting narrative decisions with his debut, but the flat pacing of the feature’s first half may restrict The Golden Cage to festival exposure. His background in the photographic department is apparent in this low-budget film (which passed through the Cannes Atelier). Making much use of available light, which pays off particularly in some redolent twilight shots, he has also (successfully) cast non-actors from Guatemala in the film’s three leads.

The Golden Cage clearly demonstrates what a huge effort even reaching their own country’s border with Mexico is for two 16-year-old boys Juan (Lopez) and Samuel (Carlos Chajon) and their friend Sarah (Martinez), who is disguising herself as a boy. They set off from their slum shacks in Guatemala City with little money and even less idea of what might await them on the treacherous route to the quasi-mythical United States of America.

Captured and repatriated almost immediately, they set out again, without Samuel – however they have gained a tagalong named Chauk (Dominguez) en route. Chauk is a good-natured Indian from Chiapas who doesn’t speak Spanish but is fascinated by Sarah, something that doesn’t ender him to the jealous Juan.

Quemada-Diez, condensing hundreds of such real-life stories in his screenplay, conveys the solidarity on the roads and train-tops that wind through Mexico stacked with migrants, but the betrayals and violence that also await as the would-be illegal immigrants prey on their own fellow travellers.

Working best on the road - a coda takes The Golden Cage a step too far narratively – the director could probably have tightened up some of the earlier sequences, as the film has a tendency to drag. Chauk’s silence and the youngsters’ inability to communicate with each other doesn’t help in this respect, somewhat stranding the film on this lengthy journey. The young actors are fresh and likable, however, and the relationship between Juan and Chuak becomes effortless, particularly as they move closer to their final destination.