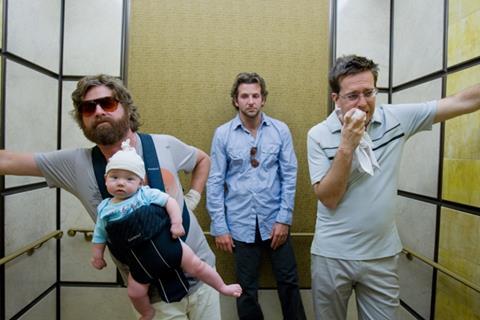 Great stag nights come in two varieties: the ones you’ll never forget and the ones so riotous you can’t remember a thing that happened. The Hangover focuses on the latter type, eliciting a steady stream of laughs from a story about a particularly raucous (and unexpectedly dangerous) Las Vegas stag party that goes wrong in many funny ways. Proudly inappropriate and buoyed by both a clever script and some obvious chemistry between the film’s male leads, director Todd Phillips’ comedy will play like gangbusters with men and may even attract some women who know and love knuckleheads like the ones up on the screen.

The Hangover opens in the US on June 5, the same weekend as another comedic entry, Will Ferrell’s Land Of The Lost. Warner Bros. will look to emphasize Hangover’s R-rating, hoping that audiences of previous adult-themed summer comedies – such as Wedding Crashers, Knocked Up and Superbad – will come flocking. With co-lead Bradley Cooper the most recognizable name among the film’s stars, The Hangover’s other major selling point could end up being director Todd Phillips, who has established a track record with male-centric R-rated comedies like Old School and Road Trip.

Best friends Phil (Bradley Cooper) and Stu (Ed Helms) take their pal Doug (Justin Bartha) to Las Vegas for his bachelor party, accompanied by Doug’s weird soon-to-be brother-in-law Alan (Zach Galifianakis). But when Phil, Stu, and Alan wake up the next morning in their Vegas hotel room, they can’t remember what they did during the previous evening and, more importantly, what happened to Doug, who has vanished.

In director Todd Phillips’ previous comedies, he’s cultivated a sense of the bizarre, but his tendency for episodic, unfocused narratives tended to undercut their comedic momentum. But with The Hangover, Jon Lucas and Scott Moore’s screenplay offers a tight storyline which keeps the film steadily moving forward, resulting in a rare comedy with a potent dramatic engine.

In essence, The Hangover is structured like a humourous mystery, as Doug’s three friends must piece together clues to determine his whereabouts. The filmmakers do a competent job teasing out the story’s surprises, and while the ultimate outcome doesn’t live up to the setup’s potential, the journey is sufficiently rewarding.

With Doug off screen most of the time, Cooper, Helms and Galifianakis must carry the story, and all three actors do strong work playing different male archetypes, remaining sympathetic no matter how foolishly or misanthropically they behave. In Wedding Crashers and Yes Man, Cooper has filled the role of the roguishly handsome guy’s-guy who’s a bit of a jerk, but as Phil, he gets to plumb new depths of arrogance, to great effect. Helms articulates Stu’s henpecked timidity without reducing the character to a one-note wimp. And although Galifianakis has the toughest job of the three leads, he makes Alan more than just a stereotypical weirdo-loner, turning him into a truly pathetic and vulnerable man-child.

Without revealing any spoilers, suffice it to say that The Hangover gets excellent comic mileage from unexpected plot twists, which sometimes demands hairpin tonal shifts or peculiar celebrity cameos. Still, the filmmakers keep the proceedings mostly grounded in reality so that the stranger revelations still feel anchored in believable human interactions.

Aided by cinematographer Lawrence Sher and production designer Bill Brzeski, Phillips weaves the casinos, swanky hotels and vast deserts of Las Vegas into the fabric of The Hangover, creating an accurate sense of the city as a parallel reality ruled by eccentric misfits and rampant hedonism. Part of the film’s strength is making it all seem charming rather than horrifying.