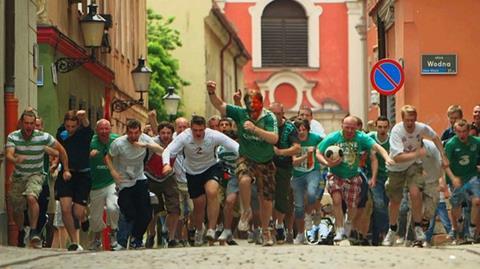 A resolutely raunchy Irish comedy that aims to mine the laddish success of films such as The Hangover and The Inbetweeners, the low-budget road-movie romp The Hardy Bucks Movie is quite simply about a bunch of friends heading off abroad in search of booze, fun, football and good craic. It is solidly entertaining Irish fodder and likely to be a hit a home, though – as with so many local comedies – will find it hard to crack the international marketplace.

Chris Tordoff’s character The Viper is the one genuinely – and consistently – funny character, and his smarmy grin, permanent sun-glasses and fondness for odd line-delivery make his on-screen moments the ones to cherish.

The film has its origins in the internet, with the original Hardy Bucks episode made by a group of friends and uploaded to YouTube, garnering more than 800,000 views and developing into a cult Irish success. Later commissioned by RT for two short television series (in 2010 and 2011), the idea of a big screen version was developed, with support coming from the Irish Film Board and Universal (which took the astute move of releasing the film in Ireland, where the film grossed more than €176,000 over the opening weekend). The film had its premiere at the Jameson Dublin International Film Festival.

With a budget of just €300,000, the film was shot very much guerrilla style, though the production values are pretty good, some animated effects nicely – though obviously – slotted into the structure and the performances all enthusiastic and engaging. It is a rough-edged affair to be sure, but wherever there is an Irish community and plenty of Guinness or whiskey there will be a welcome for these hardy bucks.

The ‘Hardy Bucks’ are a gang of lads from Castletown whose short-term dream (the film set in summer 2012) is to head over to Poland to follow the Irish soccer team, which is taking part and being soundly beaten) in the European Championships. It is not so much about the actual football as it is being part of the Irish army of fans that as descended on the country for the partying.

The lads – Eddie Durkin (Martin Maloney), Buzz O’Donnell (Owen Colgan), The Boo (Tom Kilgallon) and Frenchtoast O’Toole (Peter Cassidy) – dream of heading to Poland, but quite simply have no money. Their arch-rival The Viper (a consistently funny Chris Tordoff) manages to get a couple of tickets to a key Ireland match, and heads off in a plush RV, leaving the lads frustrated. But when Salmon (Michael Salmon) inherits some money, Eddie promises him tickets and the five of them borrow a battered van and head off to the continent.

During a stop-off in Amsterdam – cue gags about drinking, drugs, sex toys and general debauchery – Eddie and Frenchtoast get into trouble with a bar owner and are coerced into carrying marijuana to Poland. Their van breaks down, but luckily The Viper passes by and offers them a lift (as long as they stick to his 40 rules)….after all, Castletown boys have to stick together.

Pretty much all of the characters are clichéd types, but the film is made with so enthusiasm and willingness to go with the comedy flow that some of the more predictable moments can be forgiven. The comedy is layered on thick and fast, and while many of the set-ups are played loose and free, there are some stylish moments – such as using a Berlin backdrop (though the scene doubles as Poland) of a Guinness Book of Records attempt of the most lanterns being launched for one conversation – that add much to the atmosphere.

Chris Tordoff’s character The Viper is the one genuinely – and consistently – funny character, and his smarmy grin, permanent sun-glasses and fondness for odd line-delivery make his on-screen moments the ones to cherish. The Hardy Bucks Movie delivers the right amount of fun-and-games to keep fans of the series happy, and for an audience looking for an unassuming laddish night out it pretty much hits the spot.