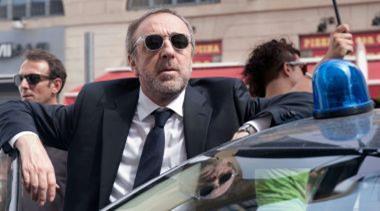 Bruno Oliviero’s first attempt at fiction is an ambitious, albeit hesitant and insecure, attempt to make a police story that would be also a look into the underbelly of modern Milan, a comment on the corruption and decadence of Italian society and a sad reflection on the relations between a stern, widowed father and his teenage daughter.

With the ending easy to predict at an early stage and the psychological motivations pretty transparent, the film is neither the thriller it promises to be nor the revealing portrait of a decaying society it purports to present.

Told in a visual style that displays his past in documentaries, with lots of handheld camera, jerky editing and huge, atmospheric, close-ups, the film’s best intentions are never given a chance to fully blossom with each cinematic style interfering with the others, as The Human Factor (La Variabile Umana) heads to an open, inconclusive, ending that falls short of expectations.

Inspector Monaco (a mournful looking Silvio Orlando, whose countenance never changes in the course of the movie) is still grieving for his wife who died three years earlier, when he is ordered by his superiors to take charge of the Ullrich investigation, involving a rich contractor shot and left to bleed to his death in his luxurious home.

On his way out, Monaco notices his teenage daughter, Linda (Alice Raffaelli) being led into the police station, apprehended when she was playing, in the company of two friends of her own age, with her father’s gun. Monaco, who has the reputation of an astute and smart investigator, is instructed to solve the Ullrich murder rapidly, the victim being a close friend of the police commissioner. He is also a strict, demanding parent who will see his daughter getting no favours and will let the law take its course in her case. But, naturally, he cannot help being concerned with her fate.

Working hand-in-hand with his corpulent assistant and friend, Carlo Levi (Giuseppe Battiston), Monaco proceeds to investigate the crime whose prime suspect is Ullrich’s wife (a sadly rarely seen Sandra Ceccarelli), while trying, at the same time, to break through the barriers separating him from his only child. He also drives a lot more than necessary through the less fashionable streets of Milan and visits quite a few of its more disreputable night spots, where dealing in everything from drugs to child prostitution is a matter of routine.

Switching constantly between pace and subject, not always in the most sensible manner, breaking down sequences unnecessarily and indulging in a dark, melancholy mood that prevails all through, punctuated with a nervous soundtrack accompaniment, Oliviero constantly hovers between an Italian version of CSI and a socially concerned condemnation of modern Italy.

But with the ending easy to predict at an early stage and the psychological motivations pretty transparent, the film is neither the thriller it promises to be nor the revealing portrait of a decaying society it purports to present. After all, rich older men lusting for fresh meat, snorting coke and betraying their wives are not news any more.

As for the father-daughter relationship, it is a painful issue, the most touching aspect in Oliviero’s film, and the ending, which leaves it unresolved, probably suggests there is no solution In sight for it.