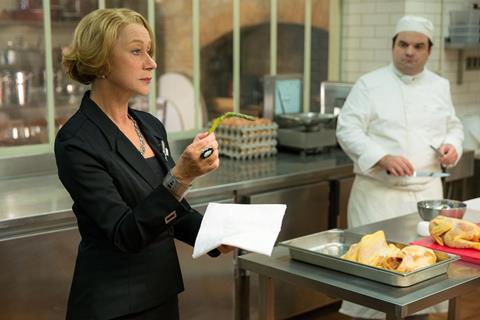 For a film that spends a lot of time extolling the virtues of spiciness, The Hundred-Foot Journey certainly goes down with the gentle, familiar agreeableness of a bland, box-top recipe — it’s casual dining comfort food disguised as exotic cuisine. A pleasant but ultimately forgettable adaptation of Richard C. Morais’ French-set, culture-clash novel of the same name, about the owners of a pair of restaurants locked in competition, director Lasse Hallström’s bauble will find purchase most readily with gastrophiles and lovers of undemanding dramedies that serve up colorfully dressed yet pat affirmations.

Linus Sandgren’s gorgeous cinematography and composer A.R. Rahman’s lively score go a long way toward holding an audience’s attention, but it’s veterans Mirren and Puri who give The Hundred-Foot Journey most of its lift.

The Best Exotic Marigold Hotel was a huge hit with mostly older viewers for distributor Fox Searchlight last year, grossing nearly two-thirds of its $137 million haul (against a mere $10 million budget) internationally. The Hundred-Foot Journey will be seeking to tap into the same pensioners demographic, and should have enough counter-programming punch and warm word-of-mouth to dutifully hang around the Stateside box office for a couple weeks, and also deliver an even stronger overseas performance (though one wonders if a title change will be necessary, given its moniker of measurement).

After suffering a family loss back in India, twenty-something Hassan Kadam (Manish Dayal) and his fellow displaced siblings find themselves searching for a sense of rootedness with their patriarch, Papa (Om Puri), when an automobile failure strands them in a small town in the south of France. They’re assisted by a local villager, Marguerite (Charlotte Le Bon), and Papa makes the decision that this is the perfect place to settle down and open an Indian eatery — no matter the demographic.

They buy and fix up a rundown property, but when the Kadams open Maison Mumbai it immediately puts them at odds with Madame Mallory (Helen Mirren), the stern and territorial proprietor of a Michelin-rated restaurant across the street. When ugly racial tensions flare up, however, Madame Mallory is the first to squash them and, recognizing Hassan’s culinary talents, she gives him an opportunity that helps send him on his way.

Hallström is at his best when his films are shot through with either a completely swollen sense of romanticism or some element of danger or mystery — qualities that are sorely lacking in The Hundred-Foot Journey, which is visually lush and all-around professionally mounted but dramatically inert. From its opening narration and attendant just-so pauses and poses that underscore its manipulated poignance, Steven Knight’s adaptation feels like it’s always working its way down a checklist. Is there a tragic past? Check. A handsome protagonist with considerable pluck? Check. Exquisite scenery with sun-soaked lens flares? Check.

The problem is The Hundred-Foot Journey doesn’t sell any sort of absorbing cultural fusion; it tells viewers about Hassan’s talent and imagination rather than convincingly show them. (The default silver bullet, distilled for Anglo audiences, seems to be merely “Add some spice.”) Full of narrative head feints, the movie feels averse to too much friction, or anything approaching real-life conflict; a bit mutual sabotage by way of ingredient buyouts at the local market is quickly tamped down, and later a briefly ignited resentment and quasi-competition between Hassan and Marguerite is summarily discarded.

At its core, this adaptation takes too long to get to the portion of its story that is most interesting. It’s 80 minutes in before the detente between Madame Mallory and the Kadams allows for Hassan to go work in her restaurant, and not until the 95-minute mark that a celebrated Hassan leaves to make good in Paris. That renders his inevitable return an unsatisfying mad dash. This might work if The Hundred-Foot Journey was richer in supporting characters, but the roster of multi-dimensional figures here goes arguably only three-deep; all of Hassan’s siblings are virtual non-entities.

Linus Sandgren’s gorgeous cinematography and composer A.R. Rahman’s lively score go a long way toward holding an audience’s attention, but it’s veterans Mirren and Puri who give The Hundred-Foot Journey most of its lift. They inhabit their characters’ innate stubbornness and occasional grumpiness with an effortless grace; their dreams are sketched in their obdurate nature.

Unfortunately, the movie doesn’t invest in sketching out a believably conflicted inner life for Hassan, which leaves Dayal little to do other than act earnest. He does that dutifully, and quite well, but this Journey is an overly familiar one.

Screenplay: Steven Knight, based on the novel of the same name by Richard C. Morais