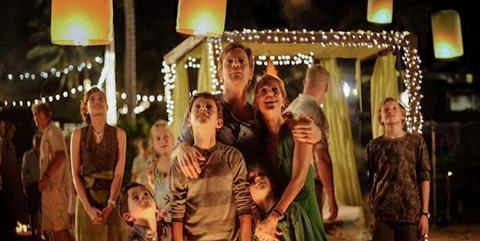 An extraordinary account of true events from the 2004 tsunami, The Impossible cannot fail to move even the hardest heart. Bravura filmmaking captures a visceral, pulse-racing sense of the chaos and carnage when nature was unleashed. Fearless, committed performances convey an authentic sense of the appalling human suffering that resulted.

The combination is overwhelming in what becomes a harrowing celebration of the human spirit and the indomitable will to survive. Critical acclaim and the word of mouth generated by such a raw emotional experience should translate into hefty theatrical returns around the world.

Five years after The Orphanage, director Juan Antonio Bayona returns with a film that is very different but just as atmospheric and haunting. When Maria (Naomi Watts), Henry (Ewan McGregor) and their three sons arrive at Khao Lak, Thailand on December 24, 2004 it felt like a paradise on earth.

Golden beaches, clear waters and cloudless skies of twinkling stars promised the Christmas holiday of a lifetime. The fact that we know what is about to happen to them marks their happiness with a palpable dread.

The tsunami dully hits and it feels distressingly real as buildings are swept away and individuals become like rag dolls pulled by the currents, twisting limbs and smashing bones. Lives are lost in the blink of an eye. Bayona follows Maria and son Lucas (Tom Holland) as they are swallowed up and spat out, bloodied and broken. Surviving the first wave of the tsunami is just the first of many struggles as mother and son desperately cling to the promise of life and the futile hope that Henry and the other boys Simon (Oaklee Pendergast) and Thomas (Samuel Joslin) are still alive.

What happens next is utterly compelling, edge of the seat drama that also provides a sense of who these people were. Even in her darkest hour, the badly injured Maria’s instinct is to help others and extend a hand of compassion.

The Impossible is flawless in its use of visual effects, make-up and production design for maximum emotional impact from the smallest detail of a wound to the bigger picture of devastation as far as the eye can see. The actors are hugely impressive with no sense of “performance” to break the spell of the reality we are witnessing.

Naomi Watts shows an immense physical commitment to her character and makes Maria a noble, heroic figure. Ewan McGregor has rarely been better than in one key scene where all the bottled up emotions of his ordeal come pouring out. The child performers are uncanny and there is an especially terrific performance from Tom Holland as the resourceful, levelheaded Lucas terrified but tenacious in the face of an unspeakable ordeal.

The only significant reservation about The Impossible might lie in the transformation of a real life Spanish family into the British, better-looking clan depicted here but that seems a small consideration in the face of such a stirring achievement.