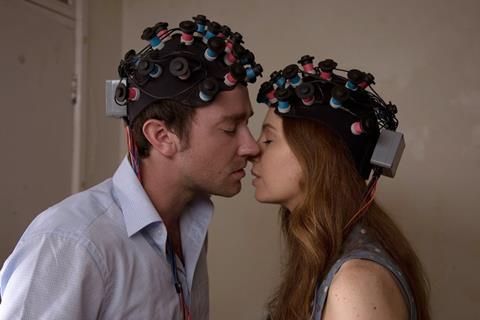 The time travel film may well be a well-worn movie genre, but Australian film The Infinite Man takes it off in all new directions as an oddball inventor uses his device to try and craft the perfect moment for he and his girlfriend. An elegantly filmed three-hander, it is a smart, funny and oddly romantic indie film that deserves to find international distribution as well as further festival exposure.

Beautifully written and engagingly complicated, the only slight frustration is that the initial high level of wit and humour gets left behind as the time travel shenanigans get more and more intense.

Writer/director Hugh Sullvan’s engagingly complex tale may well weave in paradoxes and metaphorical issues of time travel, but in the end it is simply about the extreme measures one control-freak man will take to try and recapture the love he feels wrenched away from him. Playfully puzzling and bittersweet in tone – it is genuinely funny to start with, though frustratingly the humour gives way to spiraling drama and pathos – it feels fresh and intriguing and is always watchable.

Dean (Josh McConville) is a tense obsessive who is desperate to replicate the joy he and girlfriend Lana (Hannah Marshall) had a year earlier at a remote resort. But when they arrive they find the once-busy hotel is now a ghost town. But Dean has a written schedule (“I hold in my hands a blueprint of the perfect weekend” he states) and is determined that they will enjoy their time together.

There may be no restaurant, music and even clean sheets, but Dean has brought with him a brain-recording device that he claims can help them re-capture their time together. But just as they are about to have sex, up drives Lana’s old boyfriend Terry (Alex Dimitriades), a hulking man (proud of the fact he threw javelin at the Olympics) who wants Lana back. After Dean has a confused and confusing conversation with Lana she leaves with Terry, leaving Dean confused and upset.

A year later Dean calls Lana from that same abandoned hotel, pleading for her to come and see what he had constructed. He transports them a year back to their last encounter where they can try and right wrongs, spy on the earlier versions of themselves and work through the new blueprint Dean has assembled.

He insists he knows how to make her happy, but as the various versions of themselves start to accidentally interact things get more and more confusing for Dean and various paradoxes emerge. In one he and Lana spend months working their way through the Kama Sutra, while another version of him spies on the couple making love…though things get even more complex when Terry also happens to come back in time and cause trouble all over again.

Beautifully written and engagingly complicated, the only slight frustration is that the initial high level of wit and humour gets left behind as the time travel shenanigans get more and more intense, but at the core of The Infinite Man is a real sense of clever warmth and astute filmmaking structure.