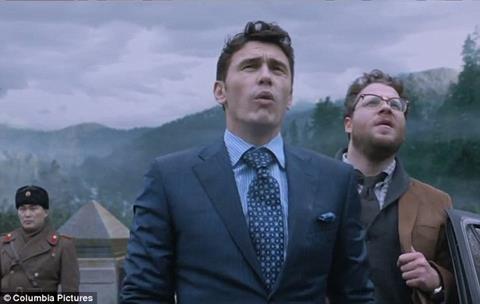 It may – or may not – have been the cause of a North Korean hack of Sony’s computer systems, but when it comes down to it The Interview is just another dose of good-natured frat boy comedy from James Franco and Seth Rogen, who previously teamed on 2008 Judd Apatow stoner yarn Pineapple Express. The double act gets worked pretty hard this time out and the result is a film that’s funny in spots – with a few touches of mild political satire – but self-indulgent and one-note for long stretches.

Featuring a version of North Korea’s real leader rather than a fictional dictator gives the film a certain edge but doesn’t do a lot for the comedy, since so little is known about the real Kim.

Truckloads of free publicity certainly won’t hurt when Sony’s Columbia opens the R-rated laugher in North America on December 25, and the exposure could push the domestic take beyond the mid-level norm for this genre. The publicity won’t be as valuable to Sony during the film’s January/February rollout in the international marketplace, where both the genre and the stars have weaker track records.

Franco’s Dave Skylark is the airheaded host of a tabloid TV news show and Rogen’s Aaron Rapaport is his more intelligent producer. When he learns that North Korean supreme leader Kim Jong-un (played by Randall Park, from Rogen’s recent summer hit Neighbors) is a fan of the show, Aaron sees a chance for journalistic credibility and lands Dave an interview with the reclusive dictator.

The CIA, however, wants Dave and Aaron to assassinate Kim and the boys end up dicing with death in the halls of the supremo’s Pyongyang palace.

With Rogen and Evan Goldberg (who previously made This Is The End, also with Rogen and Franco in the cast) directing, from a script by South Park and Daily Show alumnus Dan Sterling, the comedy is consistently broad. It mostly involves Franco and Rogen (whose association goes back to cult TV series Freaks and Geeks) riffing off each other, with Franco hamming it up and Rogen playing the straight man.

Featuring a version of North Korea’s real leader rather than a fictional dictator gives the film a certain edge but doesn’t do a lot for the comedy, since so little is known about the real Kim.