The Love We Make 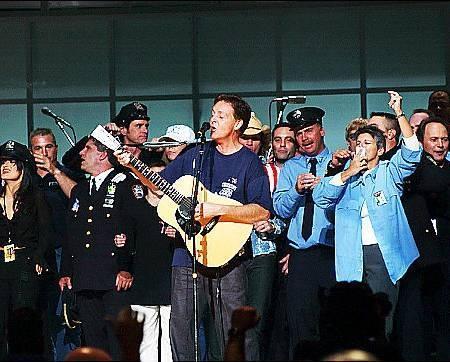 Part profile, part history, part concert, The Love We Make centres on Paul McCartney and his involvement with the Concert for New York City that occurred in Oct. 2001 on the heels of the 9/11 tragedy. The material will be broadcast in the U.S. via Showtime as part of a 10th anniversary commemoration of the event and will travel best via the small screen and in DVD sales.

One sees in brief snatches with the likes of Eric Clapton and Cheryl Crowe McCartney’s ability to quickly convey how they will collaborate without benefit of rehearsal.

Though pushed along by the looming concert, the film emerges as both an insightful examination of celebrity and ultimately an emotional experience for both its music and the context that involved such performers as Billy Joel, The Who, James Taylor and The Rolling Stones. But it’s McCartney who anchors the piece. In the opening moments he tells of how he was literally on a plane about to leave New York when the Twin Towers were hit … and never got off the ground.

Co-directed by Albert Maysles who chronicled The Beatles first visit to America in 1964, the film is actually more reminiscent of his contemporaneous Meet Marlon Brando. Maysles’ work has always been characterised by his ability to be unobtrusive and allow his subjects to be at ease. As a result with Brando, and now McCartney, the connections between the public and private personalities can be viewed and appreciated. Neither emerges as Jekylls and Hydes, though the strains of always being in the spotlight inform their off camera identities.

Apart from colour footage of television interviews and the concert itself, the film is in a somewhat grainy black-and-white that underlines its vintage. Considerable advancements have taken place in digital filmmaking in the past decade and the choice of monochrome both identifies the period and sidesteps the sometimes primitive aspect of the filmmaking of the time.

McCartney becomes less dominant when the concert begins though his interaction with other performers, fellow celebrities and organisers informs us about his musicianship and managerial skills. One sees in brief snatches with the likes of Eric Clapton and Cheryl Crowe his ability to quickly convey how they will collaborate without benefit of rehearsal.

One thread that runs through the film is the presentation of the song Freedom, written after 9/11 and to be premiered at the concert. The unstated aspect is others feeling that it is not We Are the World and one begins to suspect it will not be unveiled. But in the end Freedom is performed and all the things McCarthy promised about how it will play and the way the audience will respond prove sound.

The Love We Make finally captures the emotion of the event with such songs as A New York State of Mind, Fire and Rain and Our Song gaining texture as intercut shots of the crowd (including firefighters and police) sing along providing a personal connection to the lyrics that’s genuinely potent.